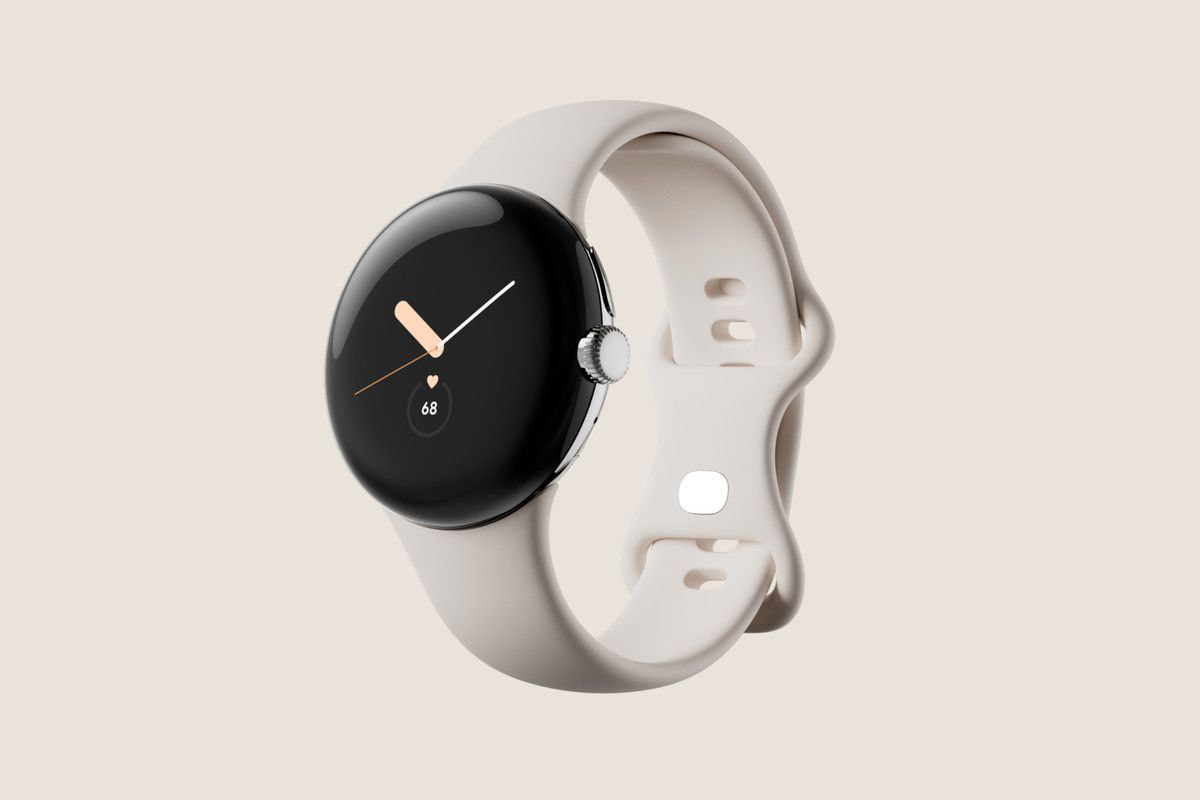 As reported by 9to5 Google, on Wednesday, Google officially confirmed that it is making a Pixel Watch smartwatch, but the preview version provided is unclear about the specifics, as it is still a few months from the market. is far. time. It is understood that the Google Pixel Watch is equipped with an Exynos chip, which originally debuted with the Samsung Galaxy Watch in 2018.

According to sources, the Google Pixel Watch uses the Exynos 9110, a Samsung chip first released in August 2018.

The Exynos 9110 chip uses a 10nm process and has two Cortex-A53 cores. This is similar to the Snapdragon Wear 4100+, but the Qualcomm chip is 12nm, which is less efficient. With the introduction of the W920 chip, Samsung says it has “about 20 percent better CPU performance and 10 times faster graphics performance than its predecessor.”

Google is likely to use an older chip since the Pixel Watch project started some time ago. When the early development of the Pixel Watch started (the Exynos 9110 was still new at the time) it was based on Android 9 Pie and later switched to Android 11.

By the time the Exynos W920 hits the market — assuming Samsung is already selling to third parties — a chipset replacement could delay the development and release of Google’s Pixel Watch so much that a replacement of the core components isn’t guaranteed. This is really regrettable.

Of course, the chipset isn’t everything. Like the Google Pixel 6, its Tensor processor is a chip-based on outdated technology compared to the latest Snapdragon products. Equally important is how Google optimizes the hardware. The biggest problem is that this old chip affects battery life. The battery capacity of the Google Pixel Watch is 300mAh.

The Google Pixel Watch will be officially released this fall alongside the Pixel 7 and 7 Pro. 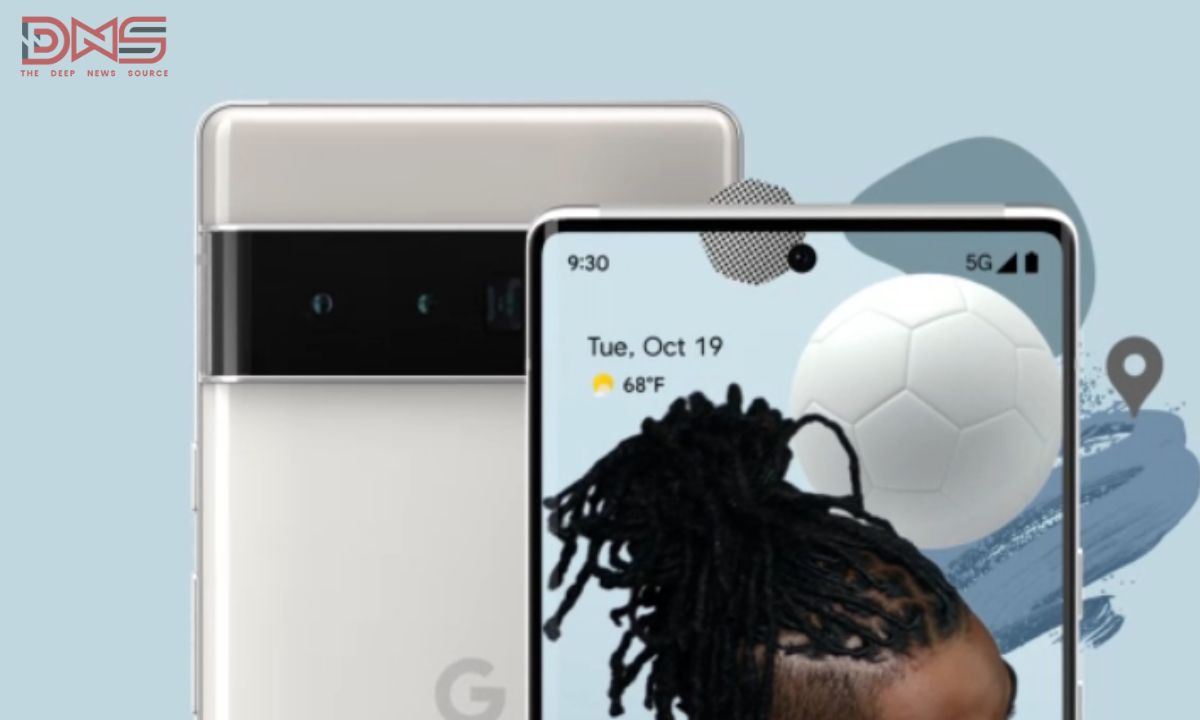 Google last week released the June 2022 security patch software update, which applies to a variety of Pixel smartphones, from Pixel 3a to Pixel 6 Pro, and will update Android to all phones except the Pixel 3a and 3a XL. Security patch level extended to June 2022.

Google revealed that the June software update also enabled VoLTE roaming on these Pixel phones for US and global carriers, including the following devices: 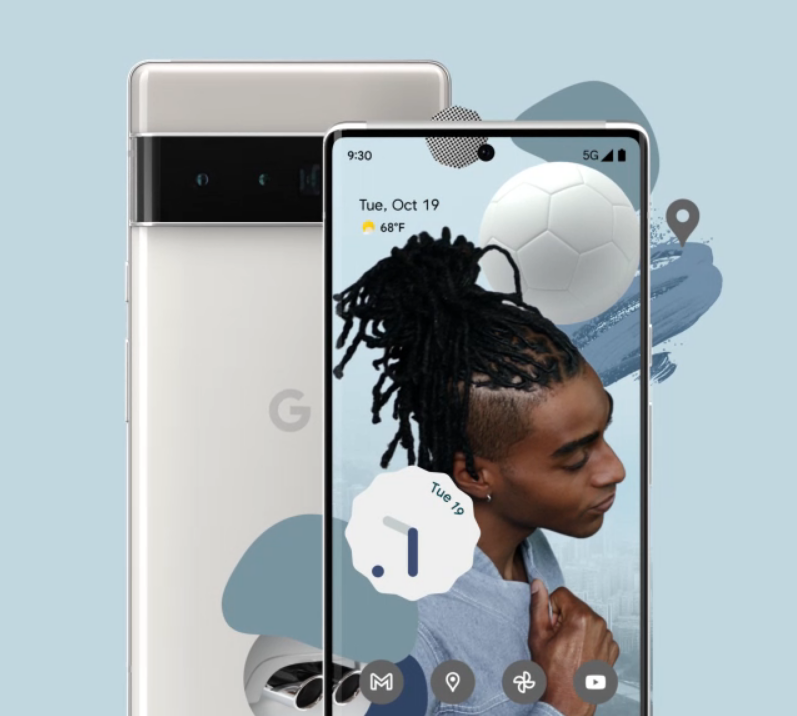 The Deep News source has learned that in 2021, the US operator announced that it will phase out its 3G network. As a result, some devices that do not support Voice over LTE (VoLTE) or VoLTE roaming may not be able to use voice calling services, including making 911 calls or losing connectivity when 3G networks are turned off.

International customers roaming in the U.S. with devices that don’t support VoLTE roaming will also “lose connectivity and/or voice calling capabilities on the affected carrier networks in the U.S.,” Google said. So if you’re traveling to the US, it’s a good idea to bring a VoLTE-enabled device and check if your carrier supports VoLTE roaming. 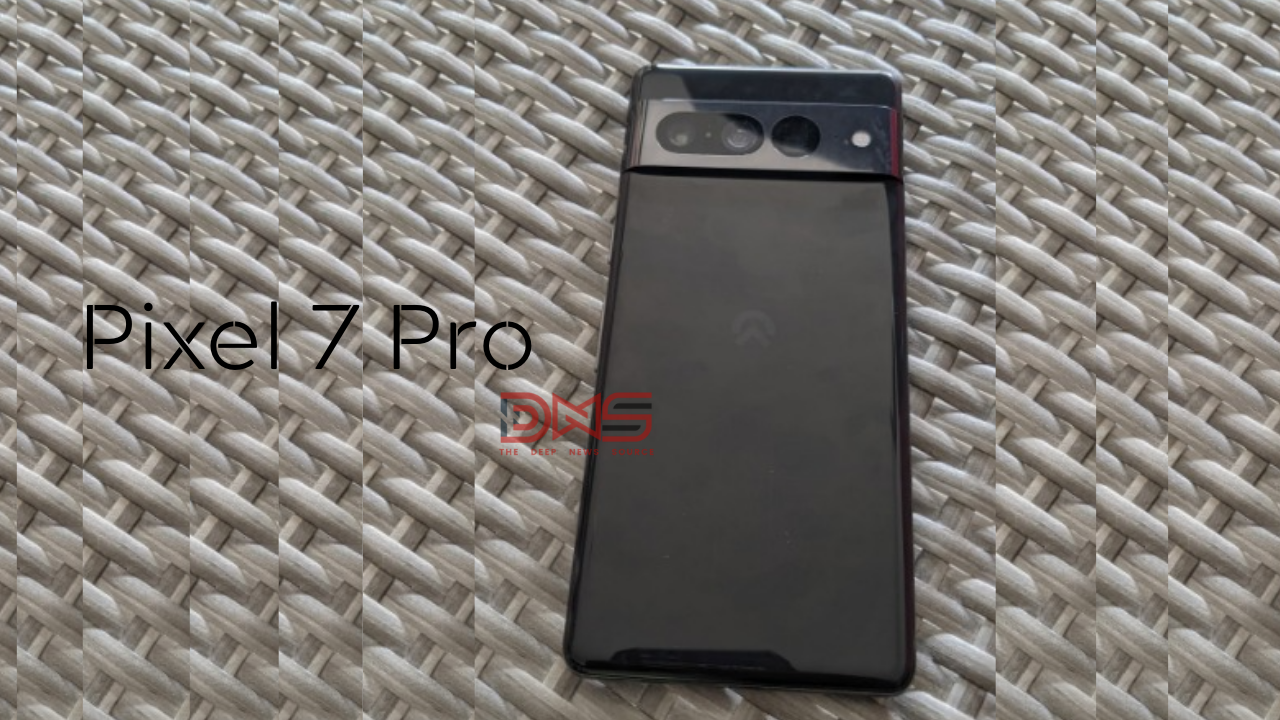 Google revealed at the Google I/O conference a few weeks ago that the Pixel 7 series of mobile phones will be officially released this fall. At present, a few prototypes have flowed out, and spy photos have been exposed.

According to the latest news, developers have been able to use the Pixel 7 Pro’s display driver on the Pixel 6 Pro, which defaults to 1440p and can be downgraded to 1080p . 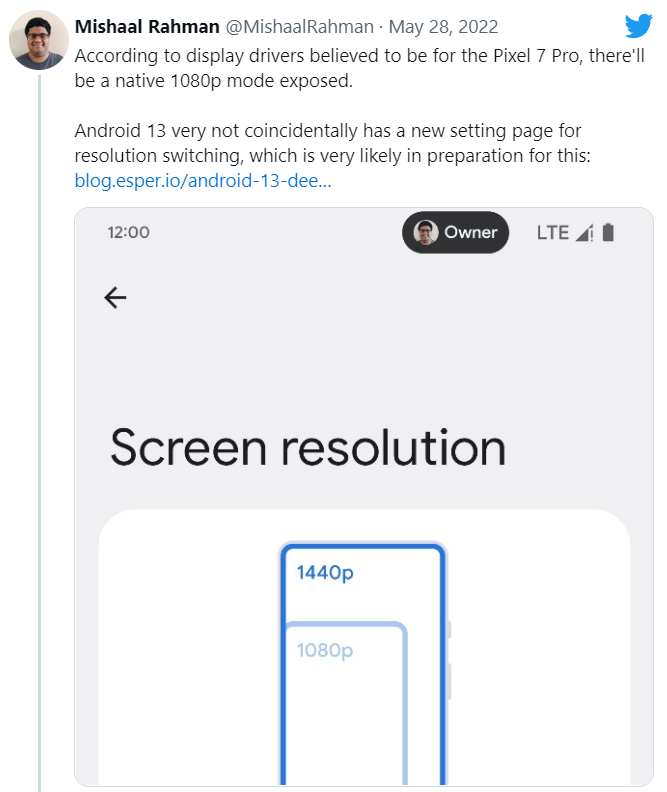 According to the image released by reliable Android whistleblower @MishaalRahman, there will be a setting option in the Android 13 system to reduce the 1440p QHD+ screen resolution to 1080p FHD+, 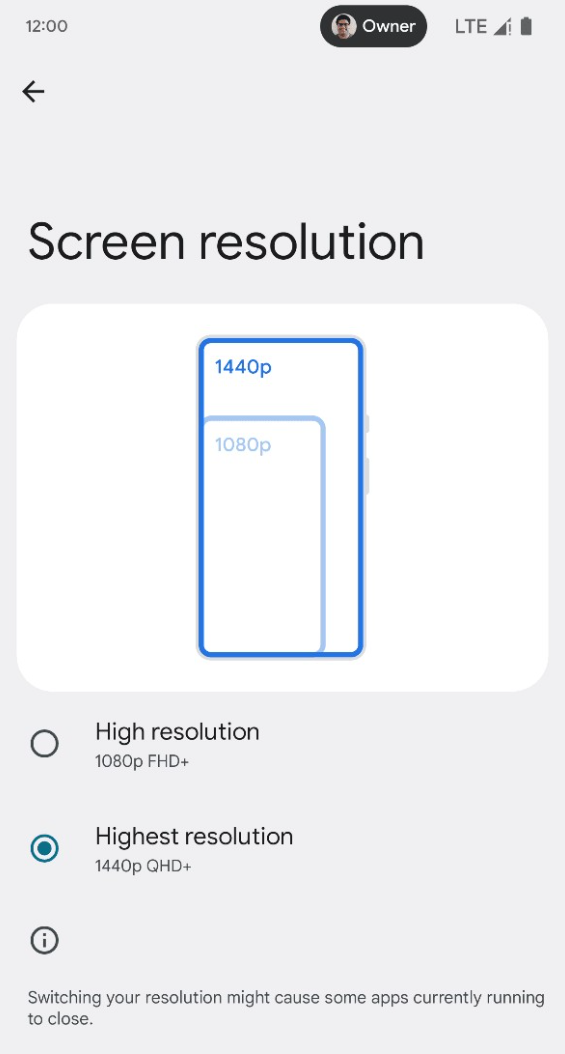 According to the exposed demo video, after the user clicks the 1080p resolution option, the screen will briefly black out, and then all display content will become larger . 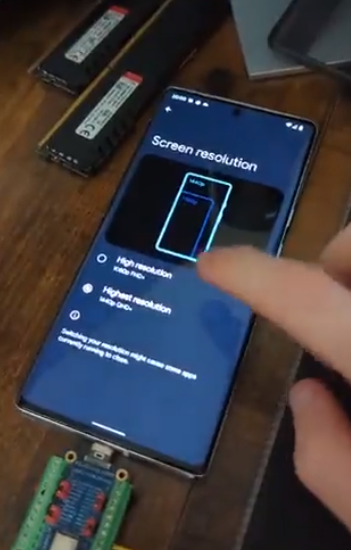 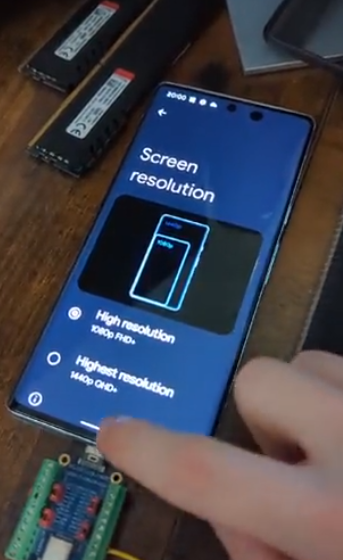 The developer also confirmed that this is an actual resolution change at the driver level , not just a scaled resolution set via ADB or other means.

As for why you want to change the resolution, it may be for a better gaming experience. Similar to the Windows system, players reduce the resolution to make the game frame rate higher and run more smoothly.

Google’s 200 yuan Pixel 6 protective case was complained, and it turned yellow and deformed after a few weeks 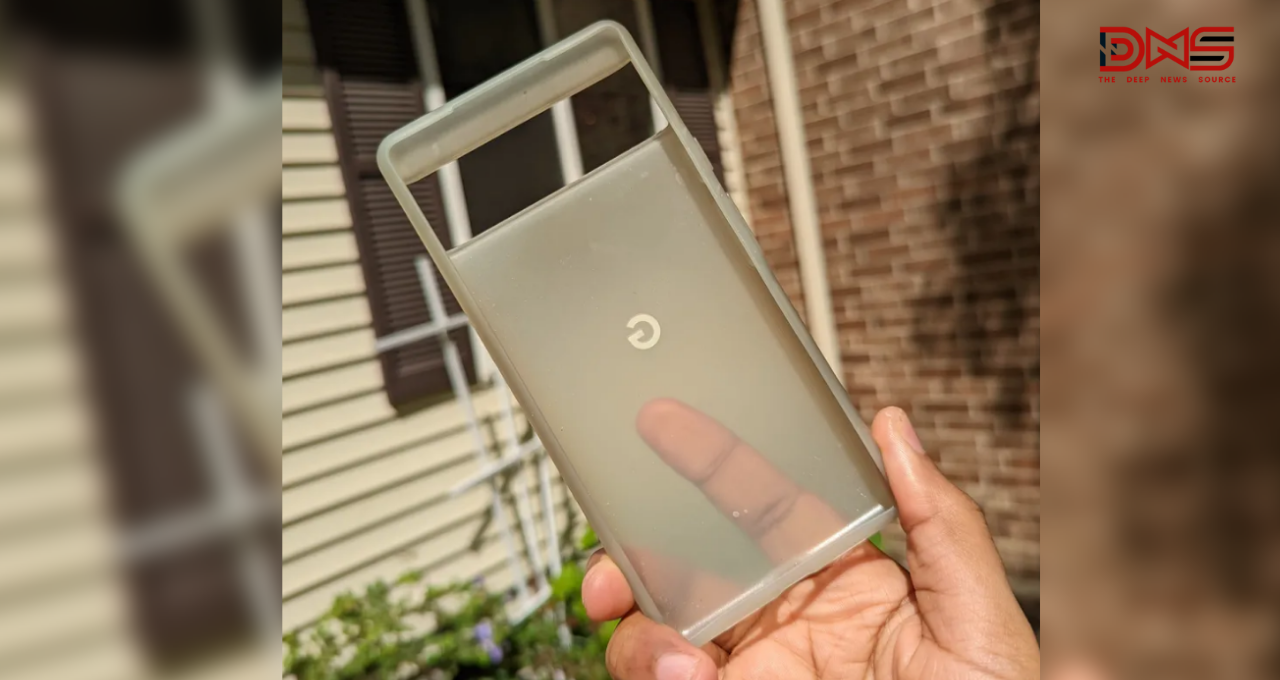 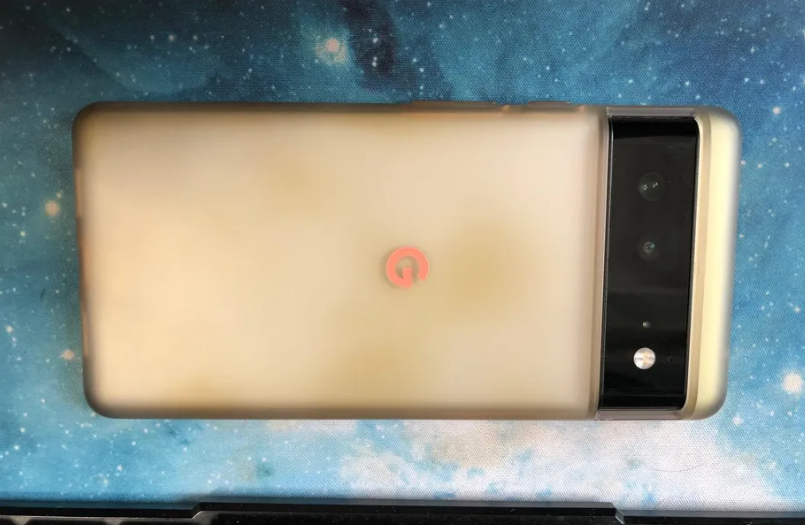 Some users have posted photos of old-looking phone cases, claiming to have aged in a few months to two or three weeks. An editor for The Verge said his phone case was also starting to look “a bit shabby.”

It doesn’t seem like it’s just one batch of phone cases that are having a problem, there was a thread complaining about the issue on Reddit a month ago, and a similar rant a few hours ago. Some posts also mention that the case has deformed at the buttons or bottom, raising concerns about its ability to protect the phone.

Google did not immediately respond to a request for comment on whether the issue was known. 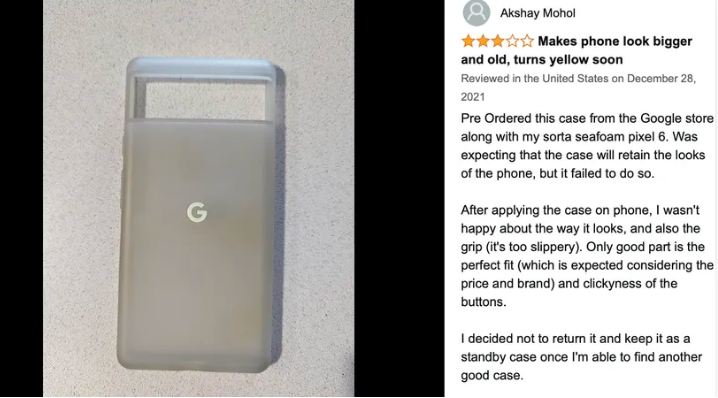 DNS has learned that although the yellowing of the transparent protective case happens sooner or later, users did not expect this to happen in just a few weeks or months, nor did they expect that the yellowing would look so serious.