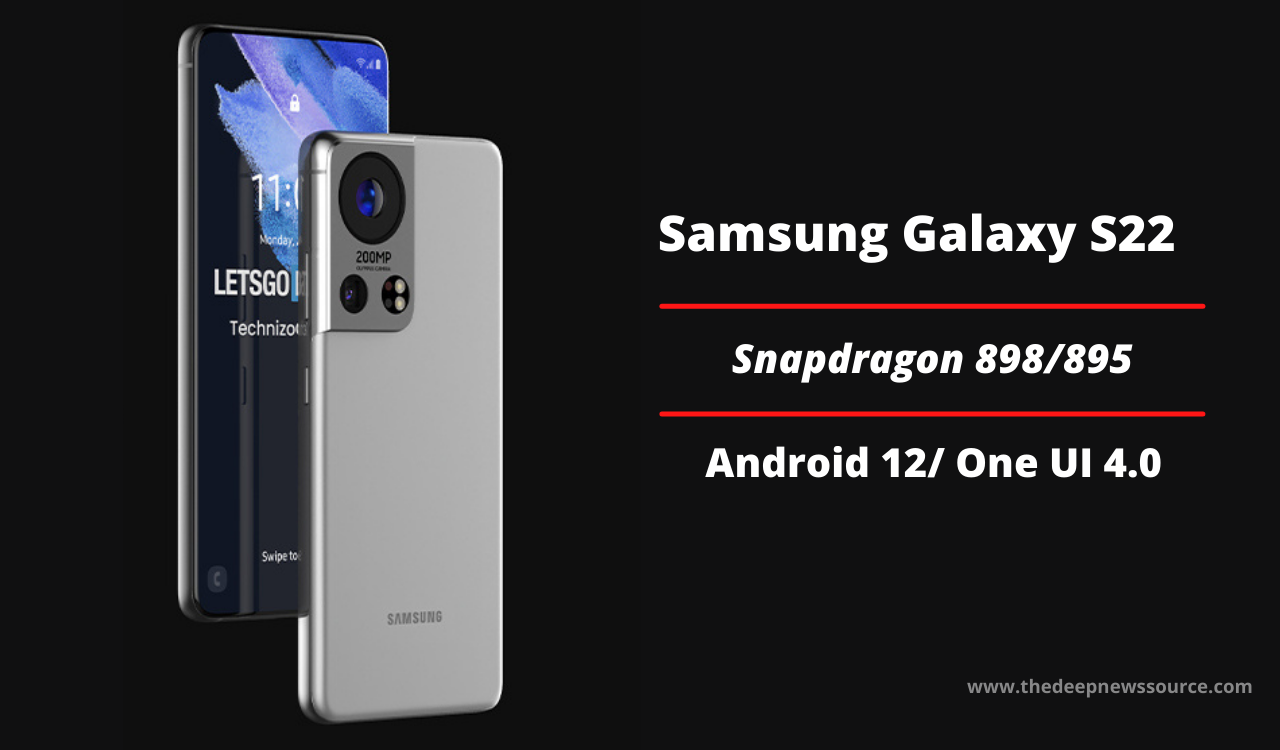 The announcement about the Galaxy S22 series is now generating a lot of buzzes. While the smartphone will not be released this year, many details and designs are being leaked regarding the series. According to the latest news, the Galaxy S22 smartphone was spotted on the Geekbench platform with the model number – SM-S901U.

The Geekbench listed has revealed some important key factors of this smartphone, the Galaxy S22 smartphone will launch with the Qualcomm Snapdragon 895 or Snapdragon 898 processor which will be launched next year, will come with 8GB of RAM and is expected to offer 128 or 256GB of storage.

The device will ship with Google’s Android 12 and Samsung’s One UI 4.0 operating systems, as expected, and it’s possible that the Galaxy S22 series may be the first to ship with One UI 4.0. According to Geekbench’s running score, the device scored 475 points in single-core functions and 1393 points in multi-core functions. 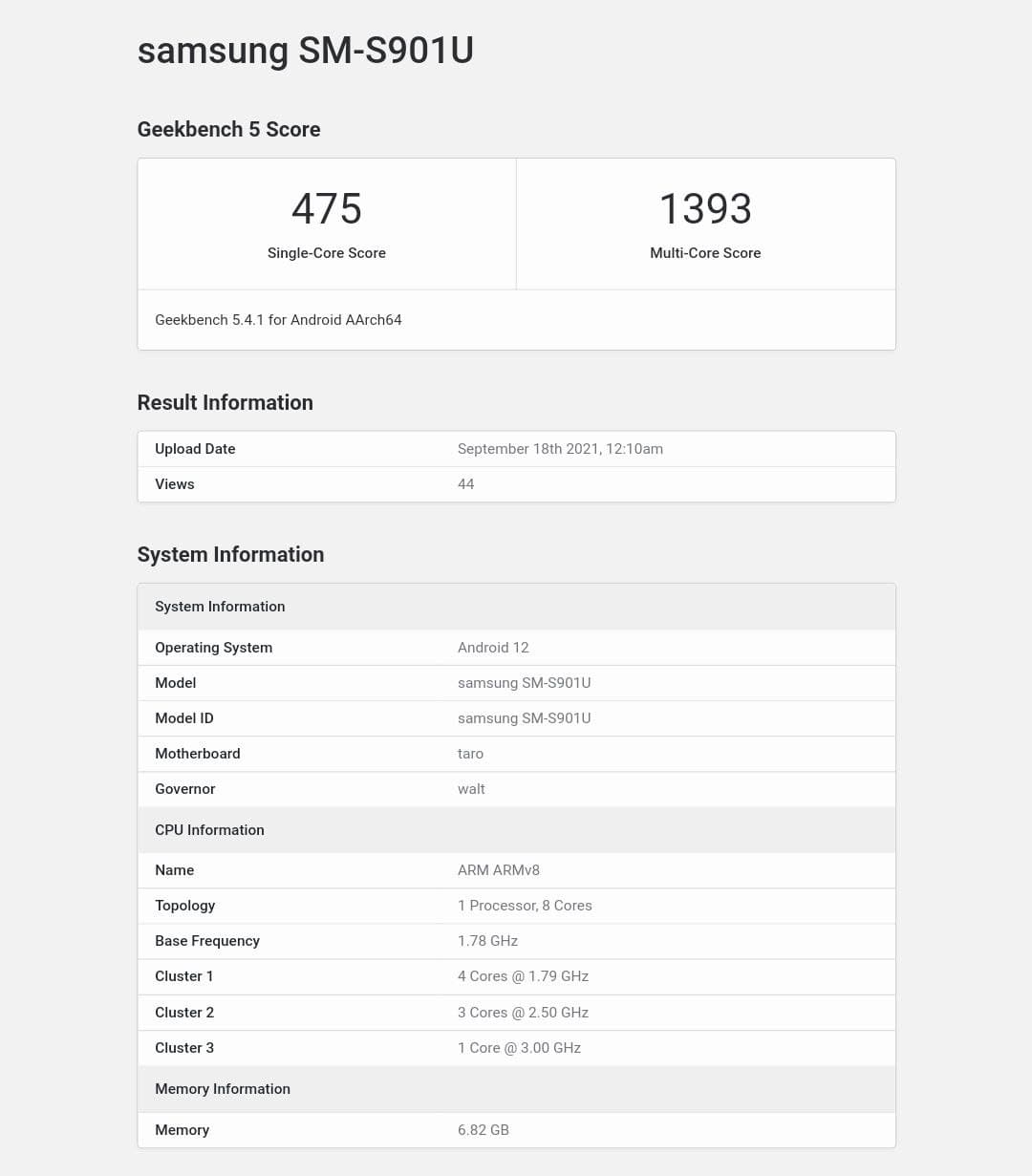 Furthermore, according to a recent leak, the S22 smartphone will have a 3770mAh battery and allow 25W charging, which is significantly less than the recently launched devices. Now let’s check some other features of this series.

The chipset has a 2.42GHz Cortex-X2 Super Core, three 2.17GHz Cortex-A710 Power cores, and four efficiencies 1.79GHz Cortex-A510 cores, according to the specifications. Later this year, we should learn more about the Snapdragon 898.

The camera arrangement of the Samsung Galaxy S22 and Galaxy S22+ was disclosed earlier this week. Both phones are expected to come with a 50-megapixel RGBW sensor, as well as a 12-megapixel telephoto lens with 3x optical zoom and a 12-megapixel ultra-wide-angle lens.

GalaxyClub’s most recent report verified these claims, stating that the two smaller S22 models had significantly improved cameras over prior generation devices.

n terms of the pixel specifications of the Samsung Galaxy S22 series cameras that have surfaced, there is no improvement over the previous generation Samsung Galaxy S21 series, and some models have even been reduced.

However, the greater the camera pixel, the weaker the camera’s capabilities, and the higher the pixel camera, the lower the image quality. As a result, rather than mindlessly increasing the camera pixel specifications, Samsung may polish the camera in different ways.

According to the 3D render image, the physical structure of the device is getting exactly the same as the Galaxy S21 Ultra model. On the backside of the device, we have seen five holes inside a vertical plate, in which the top area is quite large and the remaining four areas are set up in a similar way and an LED flash has been built between them.

As per the image conclusion, the upcoming Galaxy S22 Ultra smartphone will come with four cameras with the first sensor being a much larger size and a sensor that will probably support the Zoom in and Zoom out feature. The device has shown five color options – Red, Green, Blue, Silver and Black. 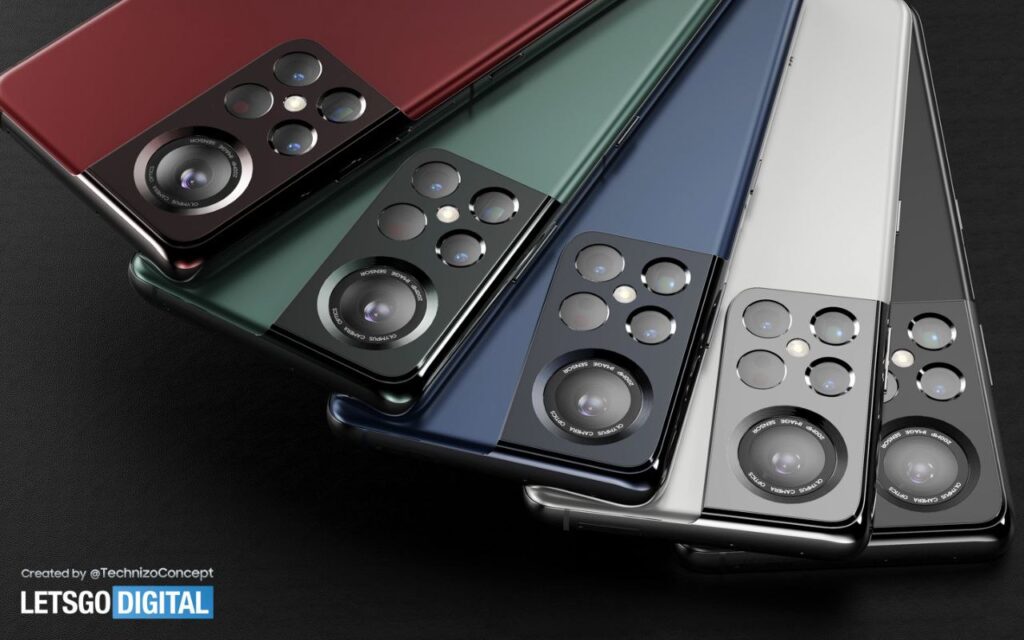 Talking about the front panel of the device, it is visible on all four sides curved and it shows a center hole punch which is for selfies and video calling. On the right side of the device, we see a power button and volume broker while at the bottom, the charging slot has present with the speaker compartment. Now let’s check the 3D rendering of the Galaxy S22 Ultra. 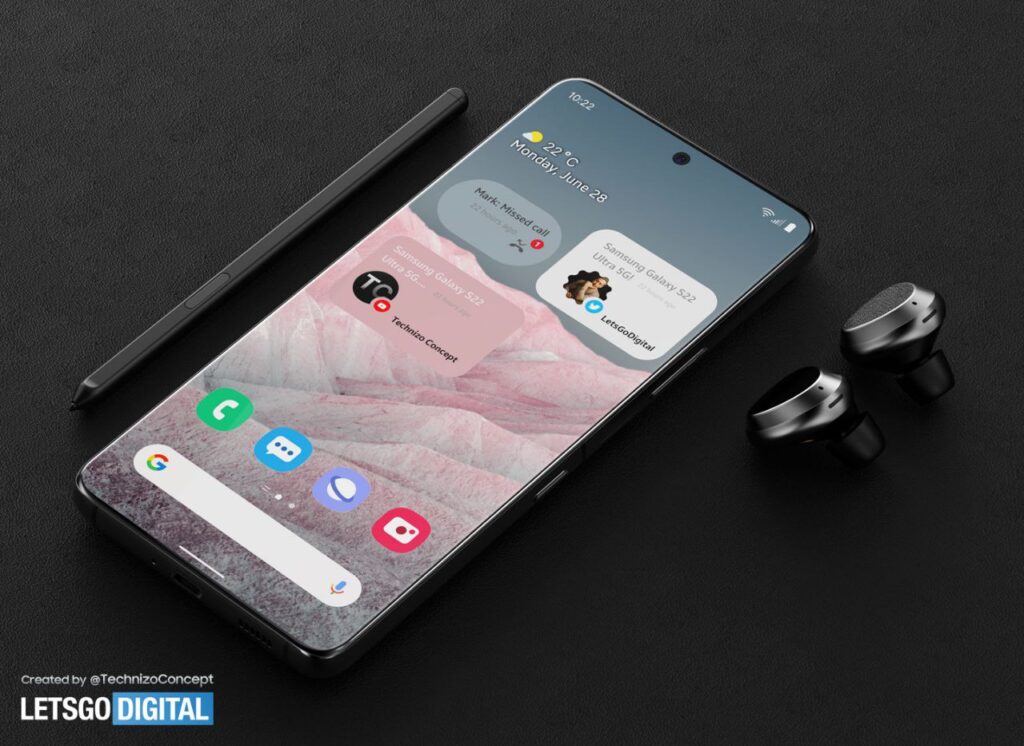 The new Samsung Galaxy S22 breaks the news: The size is smaller than the Apple iPhone 13