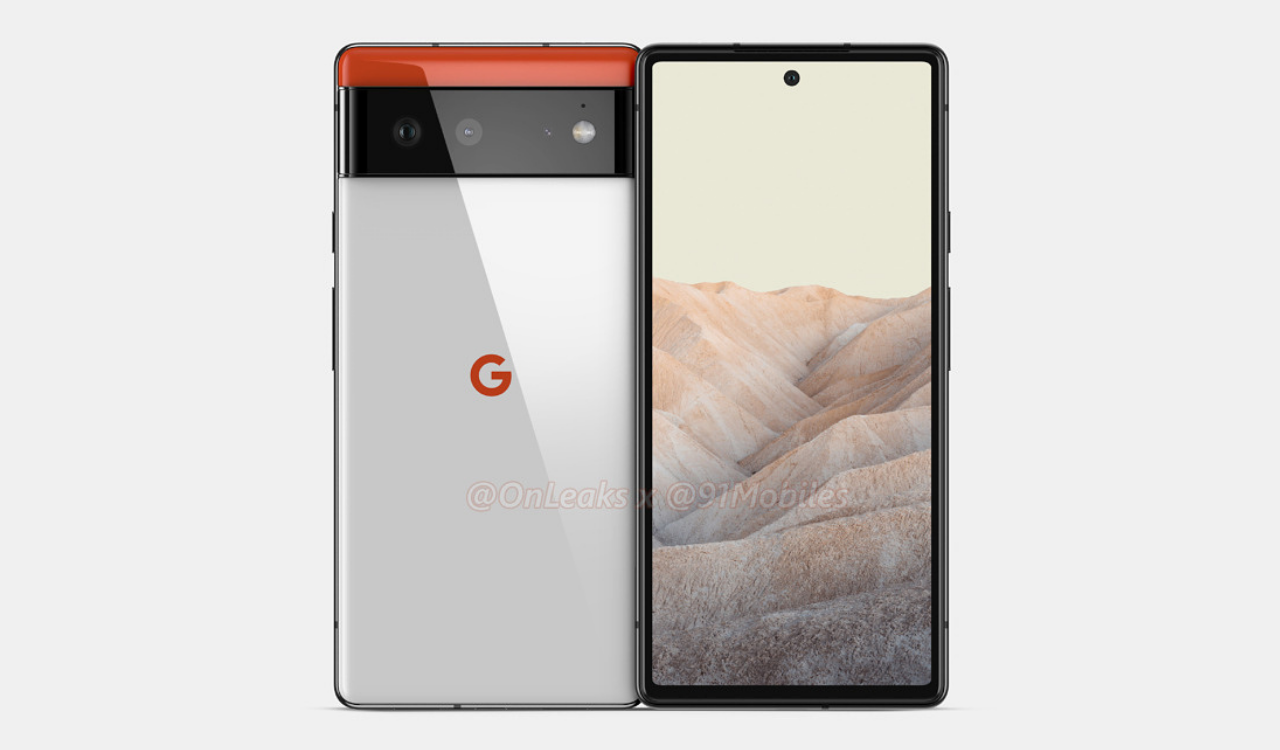 Immediately after being done the image, a great reliable tipster Max Weinbach has confirmed that the leaked render has almost the same as the original device but he has not sure about the device’s colors.

Recently there has been a lot of news that the Google Pixel 6 Series can be launched by the company at the end of the year. However, the news of this launch is coming out from the leakers, the company has not yet made any comment on this subject.

If we turn to the launch date of the two older generations of Google Pixel, so the Google Pixel 5 series was launched on September 30, 2020, and on the other side, the Google Pixel 4 series came into the market on October 15, 2019.

That is Google launched both its older generation’s smartphones in the month of October, and the source has also told that the upcoming device will be launched at the end of the year. From this, it is clearly evident that Google Pixel 6 can be debuted in the market in October 2021.

According to the latest news, the Google Pixel 6 series will launch with the Android 12 operating system out of the box. At the present time, Android 12 is rolling out in beta form for the Pixel phones and other devices. Moreover, the OS will come with the Material You design language and the wallpaper-based UX theming.

In addition, the new version will introduce a privacy dashboard that shows the details of apps and provide information on which apps are using your smartphone camera, microphone, or location. Moreover, we will get to see the number of new features in the Pixel 6 series pre-installed Android 12 version.

Apart from this, the news heated on the market, Google will provide five years of the software update to its Pixel 6 series users and it could have happened because Apple has done this job for its iPhones and the Samsung has also provided five years of a monthly security patch to its selected devices.

Note: We will keep updating this section of our article when any other information comes about the Google Pixel 6 series.

The processor is the main part of this series, Google will use the GS101 (Self-developed chip) silicon in the Pixel 6 and Pixel 6 Pro smartphone. The custom processor has seemed with the code name “Whitechapel” and the name has appeared in Android Open Source Project (AOSP).

Right now we have don’t any idea about the specifications of this chip but the report has indicated that Google has made this chipset with collaborating Samsung and will use the high-end-mail G78 GPU.

Google will launch its base version of the Pixel 6 series with the storage of 128/256GB and the supportable RAM is 8GB. If we turn into the  Google Pixel 6 Pro smartphone, so it will come with 128/256/512GB of onboard storage and it has 12GB of RAM.

One of the most striking features of the Google Pixel phone is the high quality of its camera and we hope to see the same thing in the Pixel 6 series. However, some leaks have out related to the camera key of both models but the actual result we will get to see after the launch of devices.

On the front side, the Pixel 6 has to offer an 8MP sensor for selfies and video calling while the 12MP camera sensor will be found under the Pixel 6 Pro smartphone.

Apart from this, both models have to support a wireless charging method, pack bottom-firing stereo speakers and a USB Type-C port. The Google Pixel 6 smartphone will measure roughly 158.6mm x 74.8mm x 8.9mm (11.8mm with the camera bump). On the other hand, the Pixel 6 Pro smartphone will measure roughly 163.9 x 75.8 x 8.9mm (11.5mm with camera bump).

In the month of May 2021, we saw the first render image of the Google Pixel 6 and Pixel 6 Pro smartphones. After the first rendering, the second one has come with a more sharp and great quality that provides more details of both smartphones. In the current month (July 2021) the real image of the Pixel 6 and Pixel 6 Pro was spotted and that shows the front and back panel. Below you can check all the images. 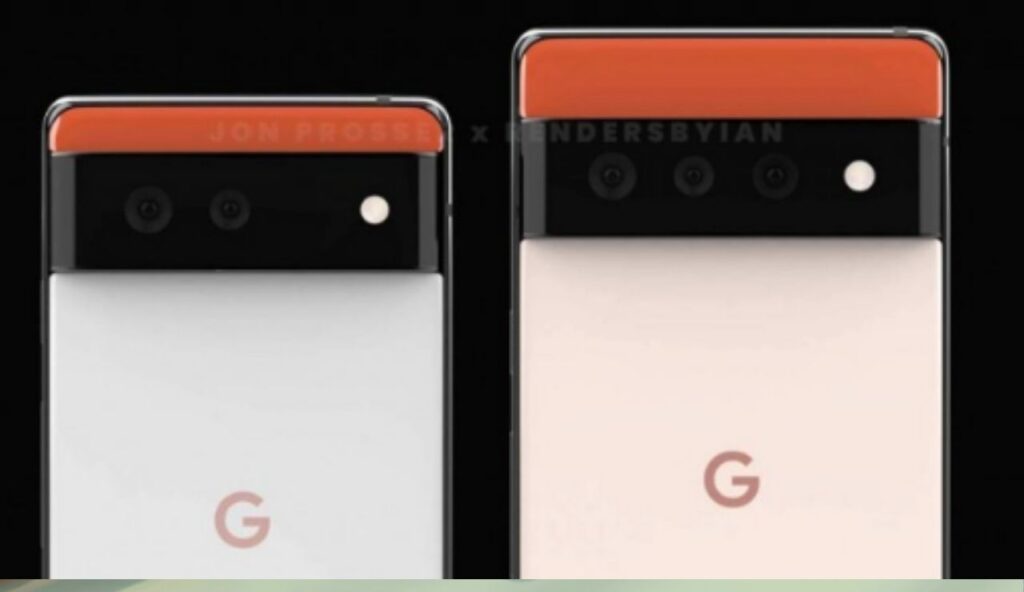 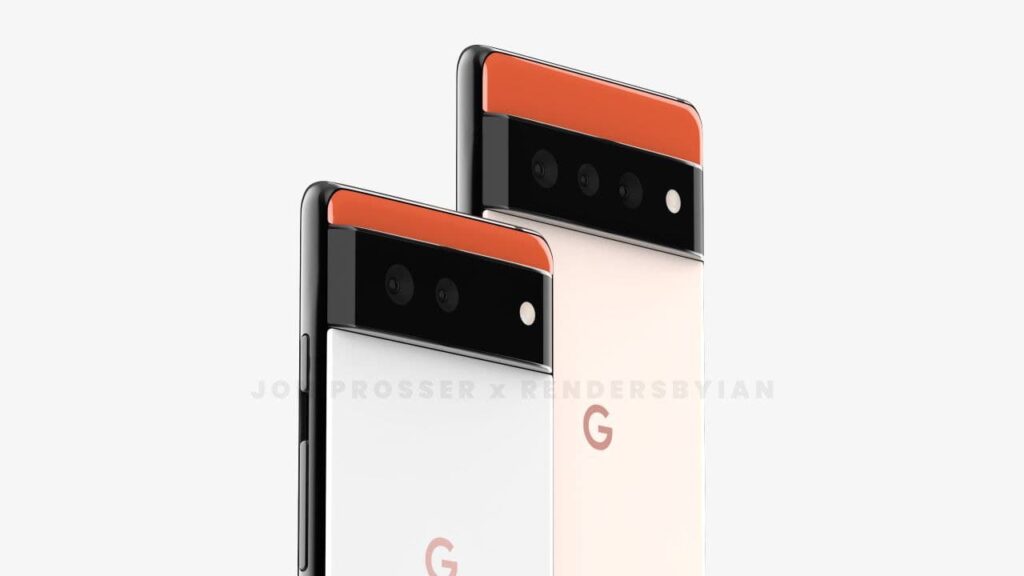 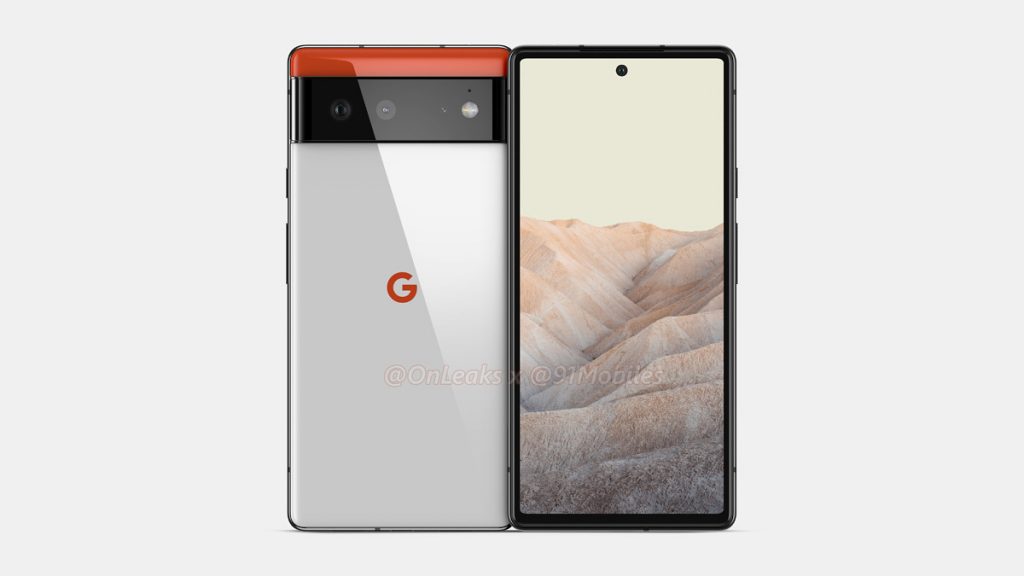 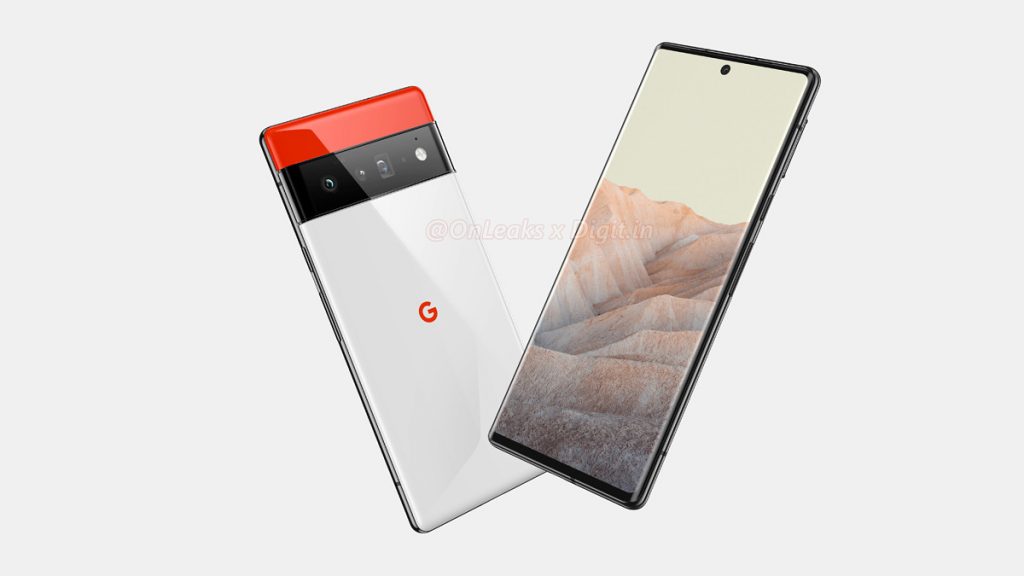 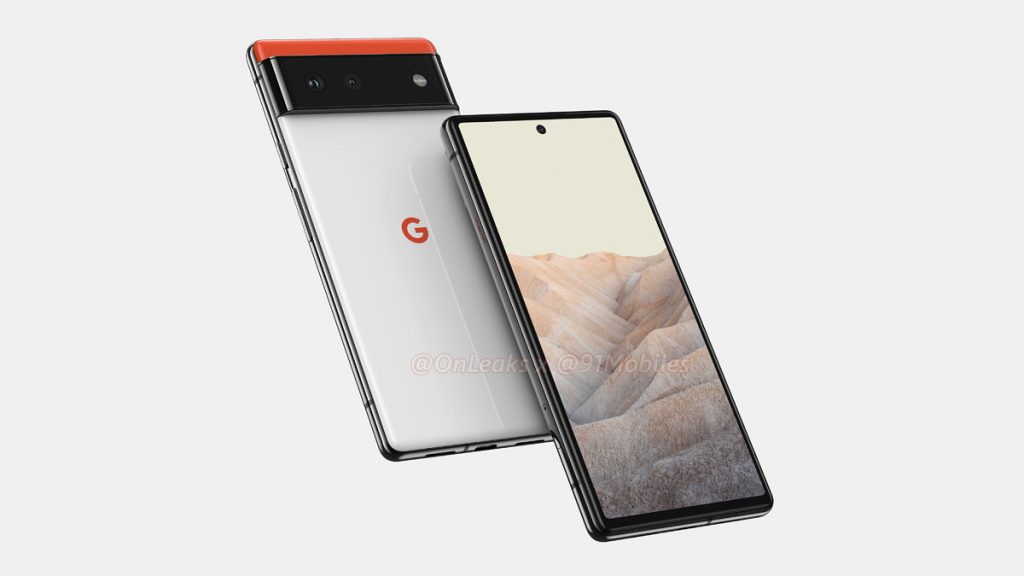 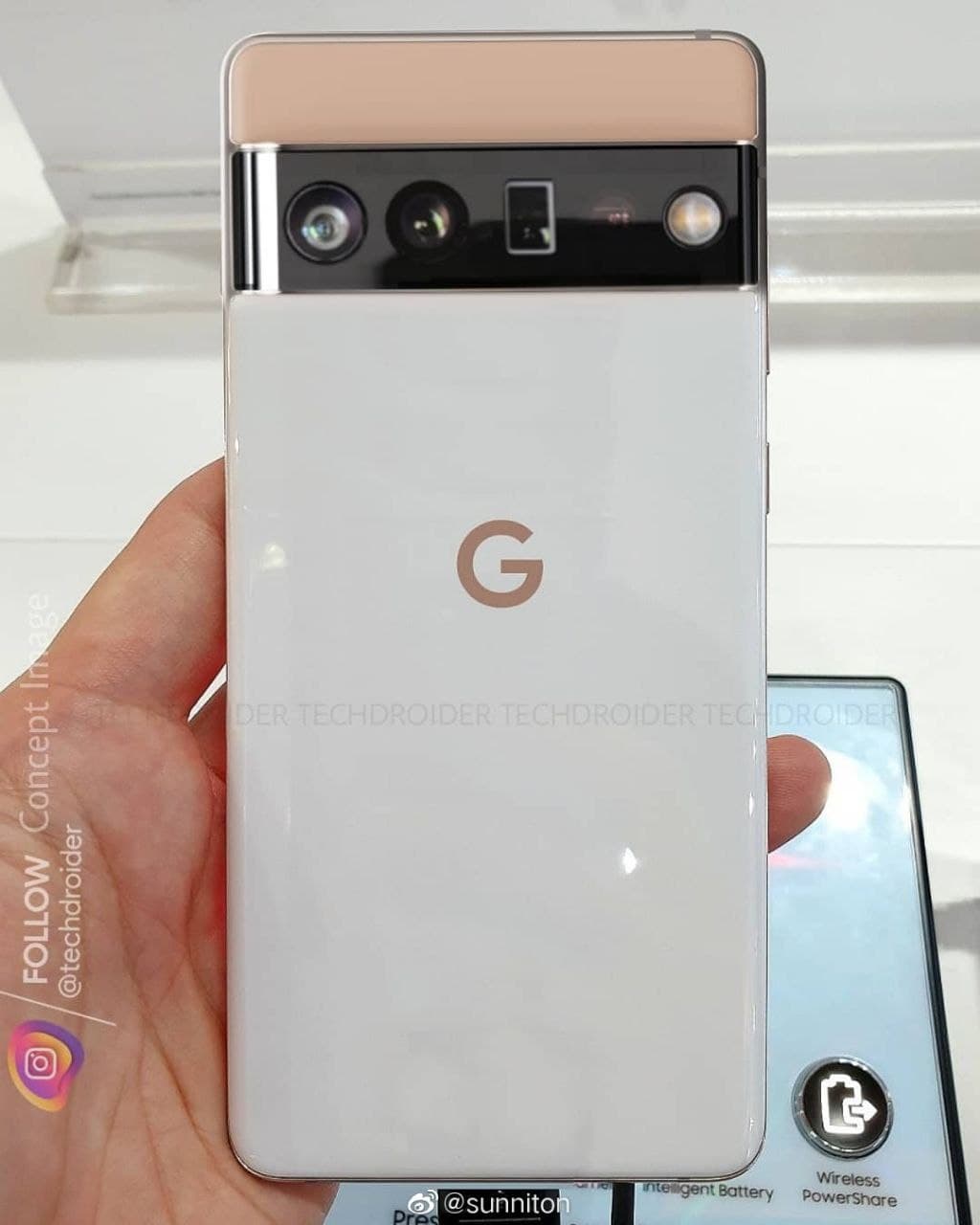 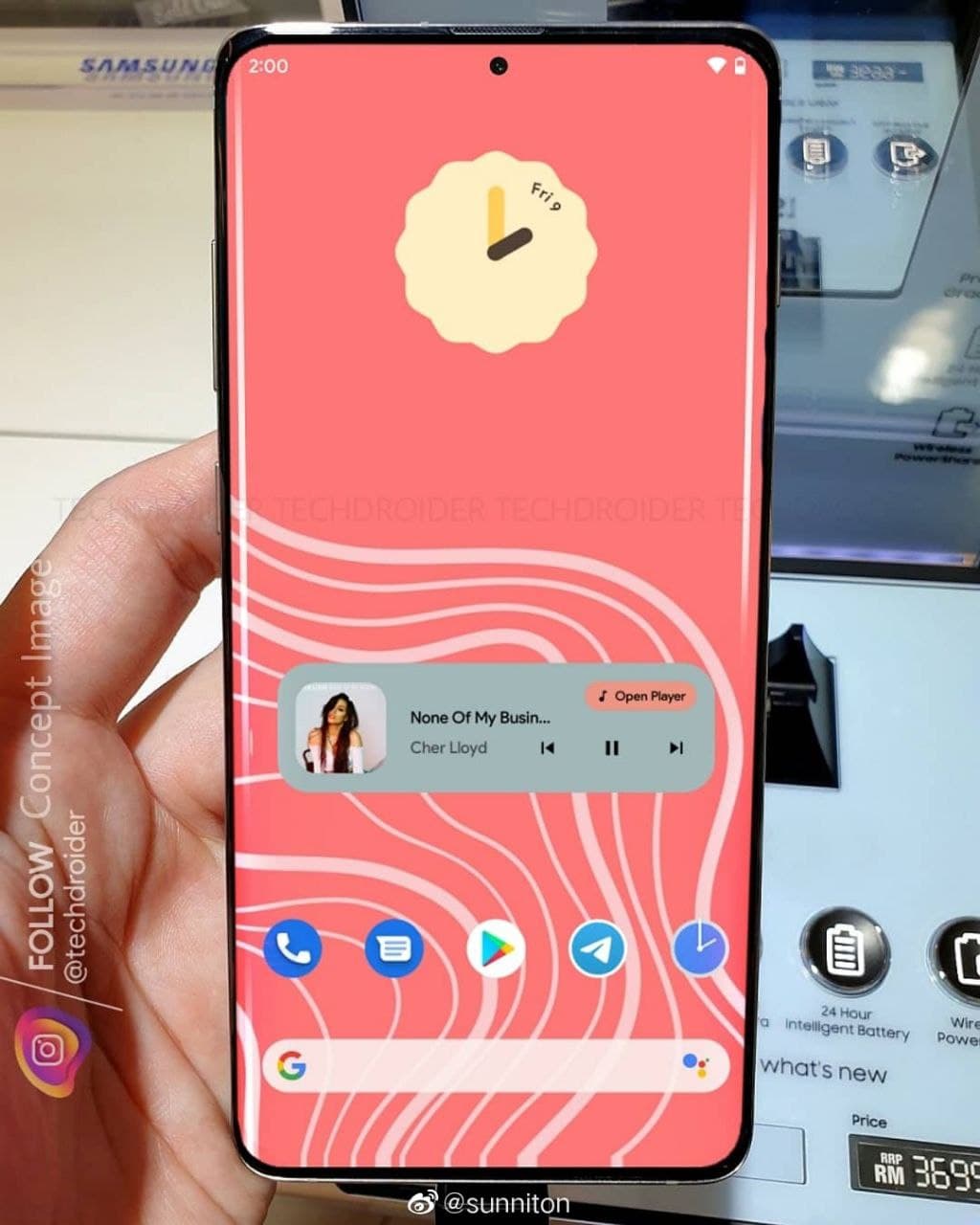 According to the report, Google Pixel 6 and 6 Pro smartphones are totally different as compared to the Pixel 5 which is launched the last year. As per the image, the front side of the Pixel 6 features a centrally aligned OLED screen with an in-screen fingerprint scanner.

All four bezels surrounding the screen appear quite slim, which indicates that it will offer a high screen-to-body ratio. On the other side, Google Pixel 6 Pro carries the same design but it will be larger compared to the Pixel 6.

On the backside, the smartphones carry a square-shaped camera module. The Google Pixel 6 smartphone can be seen sporting a new horizontal camera with a dual-camera setup and an LED flash.

The area of the camera has shown two different colors in the above or below a range of camera setup. On the other side, the Pixel 6 Pro also flaunts the same rear design, but this smartphone carries one extra lens which covered a triple camera system.

As we know that Google always brings out its smartphones in the market at a very good price. As much as the Google Pixel devices are attractive to look at, its pricing tag is also too attractive. If we looking at the price of the Google Pixel 5 series, then it is available between $873 to $1075 (roughly 65,000 INR to 80,000 INR) according to different variants.

Although, the company did not launch the XL variant in the Pixel 5 series, so according to this it is very difficult to estimate the price of the Pixel 6 series. But if we think about an approximate price from our side, then the Pixel 6 series will come at a price of above $1142 (roughly 85,000 INR).