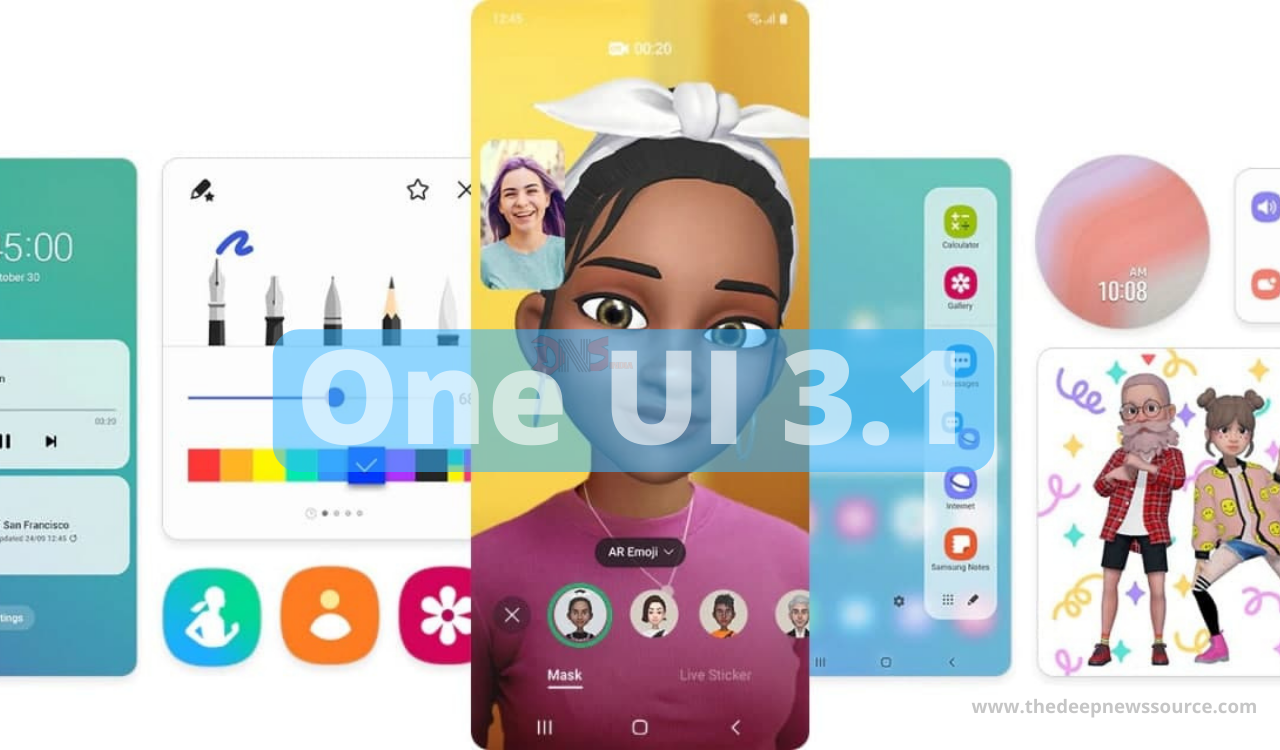 In the month of January Samsung has introduced its One UI 3.1 version along with the Samsung Galaxy S21 series. This series includes three models namely the Galaxy S21, Galaxy S21+ 5G and Galaxy S21 Ultra 5G smartphones. All of these devices come with Samsung’s latest Android 11 based One UI 3.1.

Basically, this version is an upgraded version of the One UI 3.0 and it is eligible for almost all these devices that have got the One UI 3.0 update. The latest version One UI 3.1 fully filed the feature which comes with One UI 3.0. Apart from these, it comes with lots of other unique features.

After its launch, the company has released the One UI 3.1 stable update to its eligible devices and some smartphone users have received this version with full features like a single take, object eraser, touch autofocus, autoexposure controller, multi Mic recording, eye comfort shield, remove location data and more.

Moreover, the One UI 3.1 brings one new feature which is the video calling effect features, this latest feature inspires the worldwide famous application Snapchat. As we get many type of effects in Snapchat similarly in this video call feature users will get three type of effects such as bluer background, second color option and creat a image on background. Now below you can check how to apply the Video calling effect fetures.

Samsung One UI 3.1: How to turn on Video Calling effect feature: 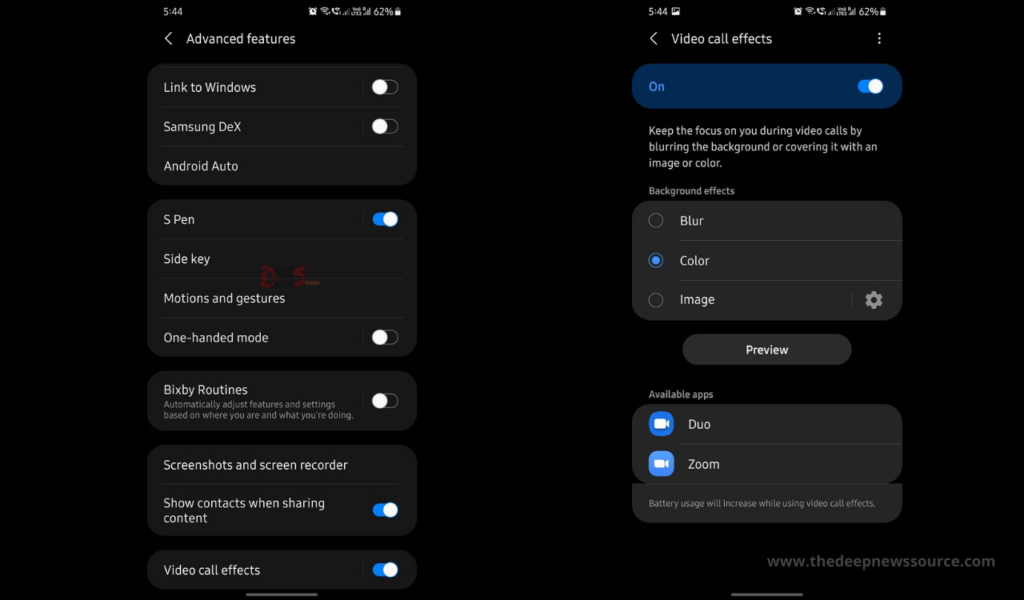 Realme added a Starry mode feature in camera section, Check how to use

Did you know that over 120 Samsung devices have received Android 11 based One UI 3.0/3.1 major update 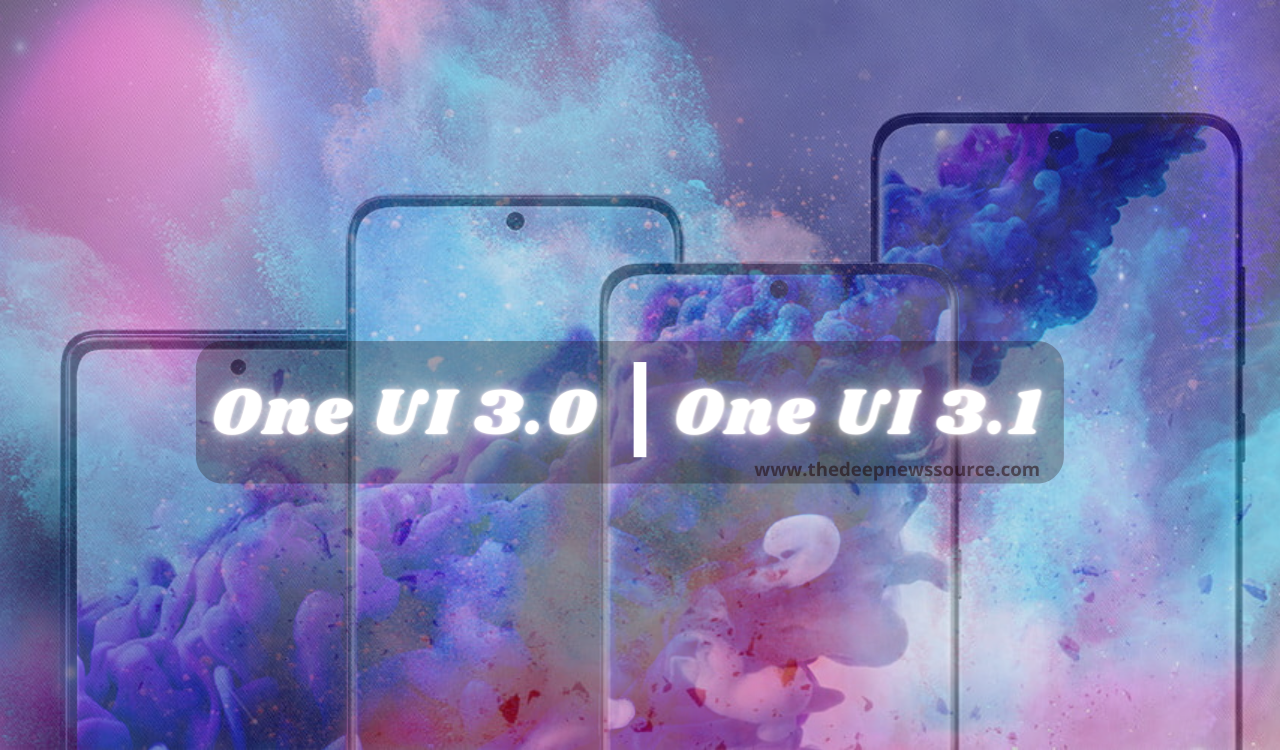 Back in the last year, the South Korean tech giant Samsung has introduced its new Android-based skin – One UI 3.0. The company has launched this skin after the launching of Google’s Android 11 and tie-up with Google’s latest Android operating system.

After the launch of Samsung One UI 3.0, its features were first released by the company through beta testing and after that stable version was released for the Samsung compatible devices.

At the starting of 2021, many Samsung devices have got the One UI 3.0 major update which is supportable for Android 11 and later the company has announced the upgraded version of this skin which is One UI 3.1 and it has launched with the Samsung Galaxy S21 series.

As per the report, the One UI 3.1 is also based on the Android 11 operating system and it has come with some minor changes like better security, more stable performance, some new features and more. Right now, over 100 Samsung devices have running on the Android 11 based One UI 3.0 and 3.1 Android skin. Down you can check the name of your device whether it has received the One UI 3.0/3.1 update or not? 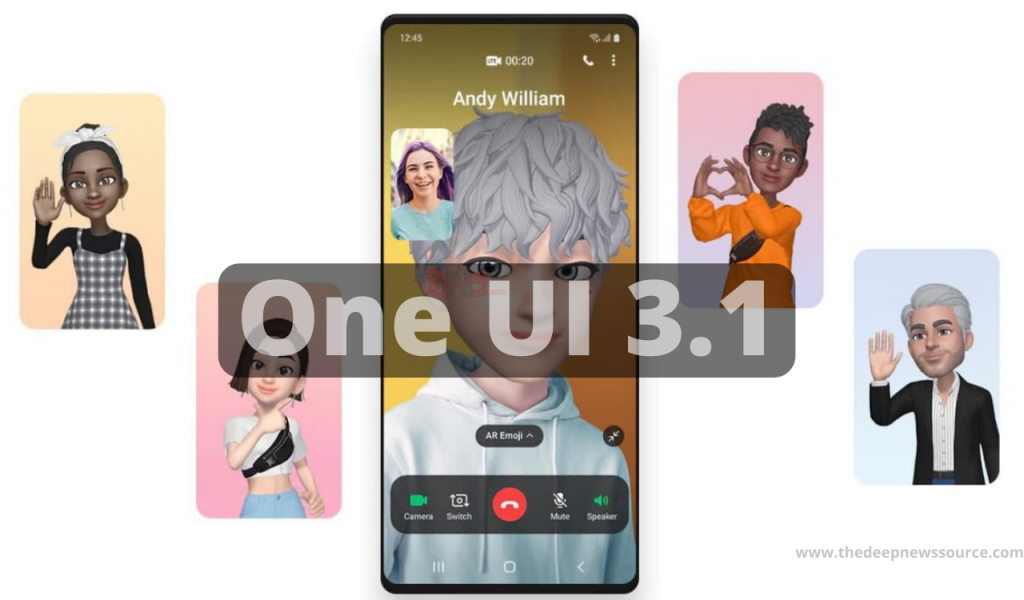 These Samsung devices received the Android 11 based One UI 3.0 update: (Check your device)

These Samsung devices received the Android 11 based One UI 3.1 update: (Check your device)

These Samsung devices launched with pre-installed One UI 3.1/ Android 11: 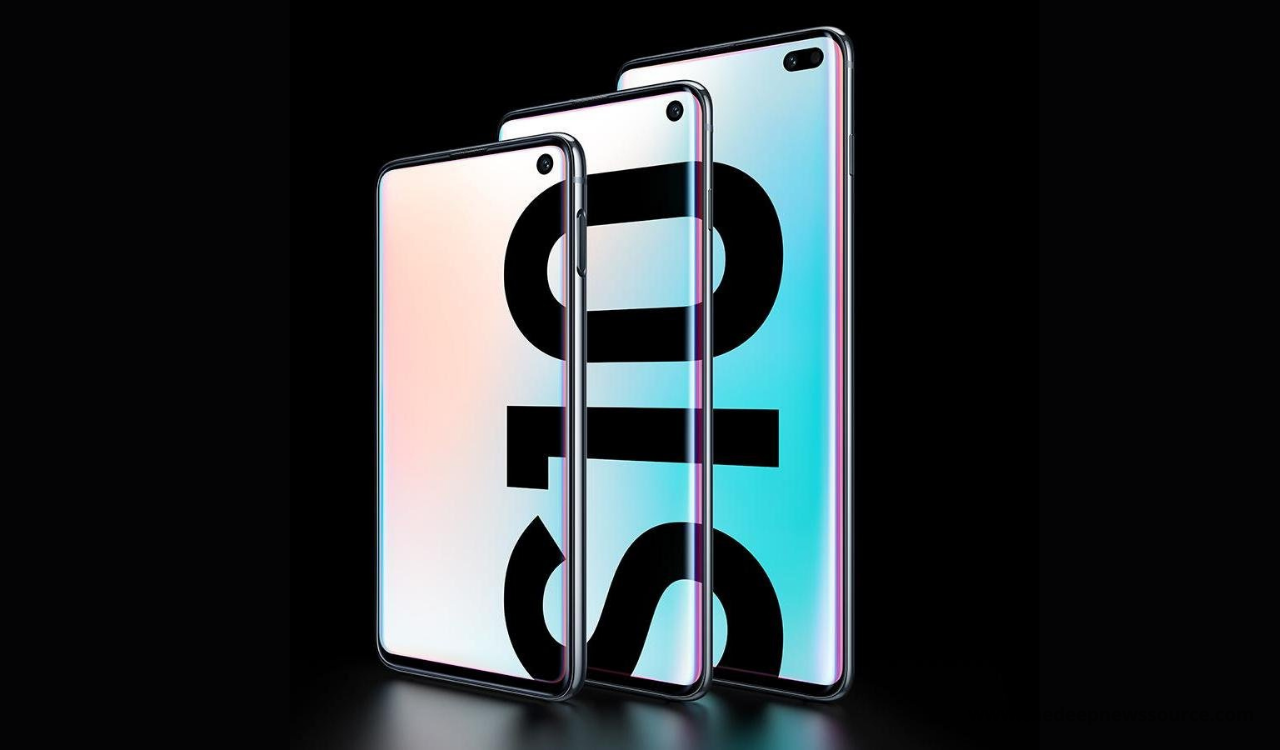 Once again! the Korean tech giant Samsung has started releasing the next month’s (July 2021) security patch update while the month is yet to begin. According to the SAMmobile report, the Galaxy S10 series is the first witness of this patch and all models are get the new patch update which formalized the July 2021 patch.

According to the report, the Galaxy S10 series smartphone users have got this patch with the build number G973FXXSBFUF3 but users should not expect any new features from this patch at all as it only advances the security method. As per the report, the version has rollout in batches so it will take a little time to reach your device and the update also available for other region’s users in the coming time.

As per the changelog, the July 2021 security patch update increased your smartphone security. For more, the company will soon launch its new operating version might be it comes with the One UI 3.5 or One UI 3.1.1 but the good news is, the Galaxy S10, S10e and S10+ smartphones are compatible with this version. 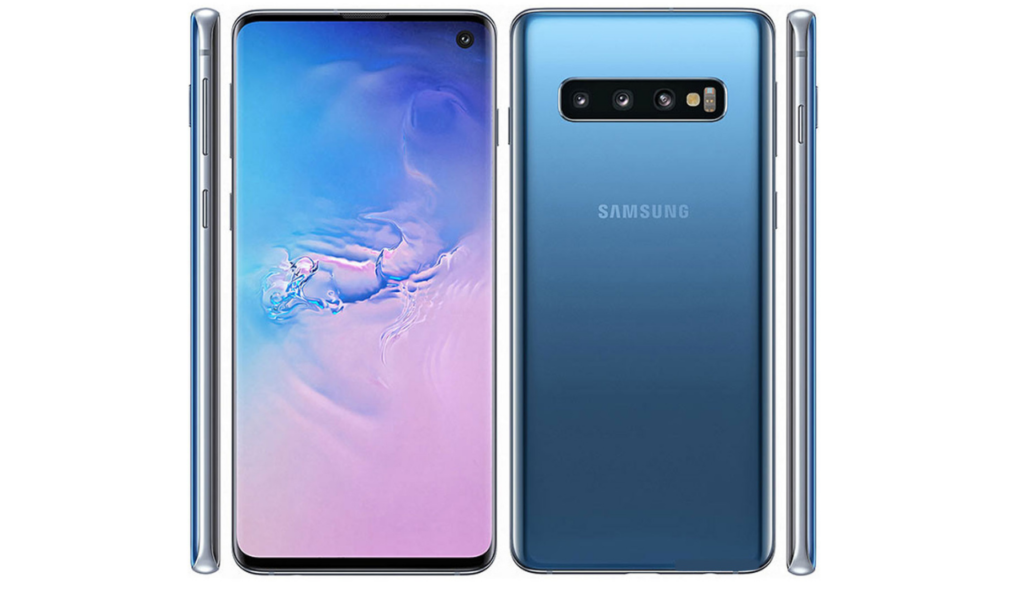 It is also expected that other Samsung devices will also start receiving this patch update today or else the update will be distributed to other devices by the company in the coming day. Well, the Galaxy S10 series smartphones has should use a WI-FI network to install this patch into the device.

One UI 3.1 based on Android 11 update now available for Samsung Galaxy A20 and A30s 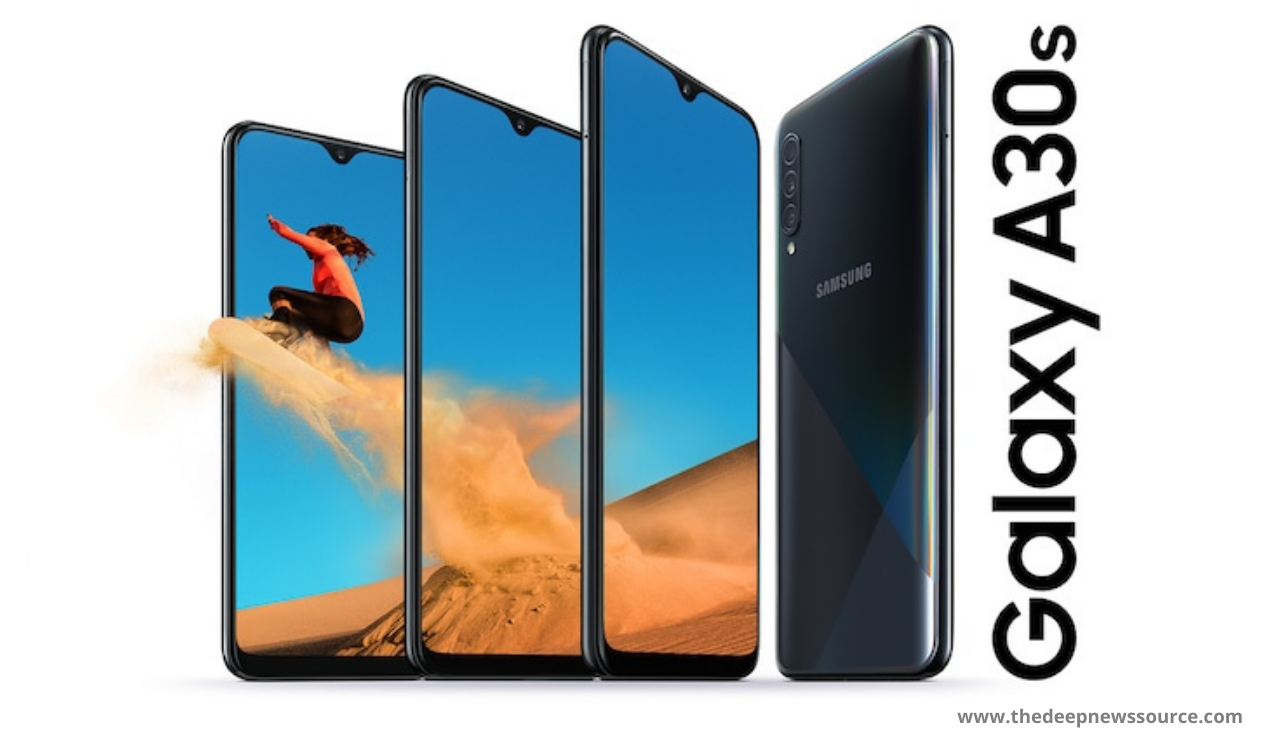 The Korean tech giant Samsung is now working on its new operating version which will be come with the name of the One UI 4.0. Back in the last month, the company has introduced its latest Android skin which is One UI 3.0 based on Android 11 and at the starting of this year, the One UI upgraded version UI 3.1 launch with Samsung premium series Galaxy S21.

The company is pushing the Android 11 stable update for its selected devices since 2021 and almost all eligible devices have got this major update. Now six months later, the company has kicking-off this update to its lower-range devices.

In this line-up, the two Samsung devices namely Galaxy A20 and Galaxy A30S smartphones started received the One UI 3.1 stable update that brings the Android 11 version.

First is the Galaxy A20 smartphone which has got the UI 3.1 major update with the version number A205FNPUUACUF1. Right now, this update available for Russian users. Apart from this, it also brings the June 2021 security patch to improve your device security performance. 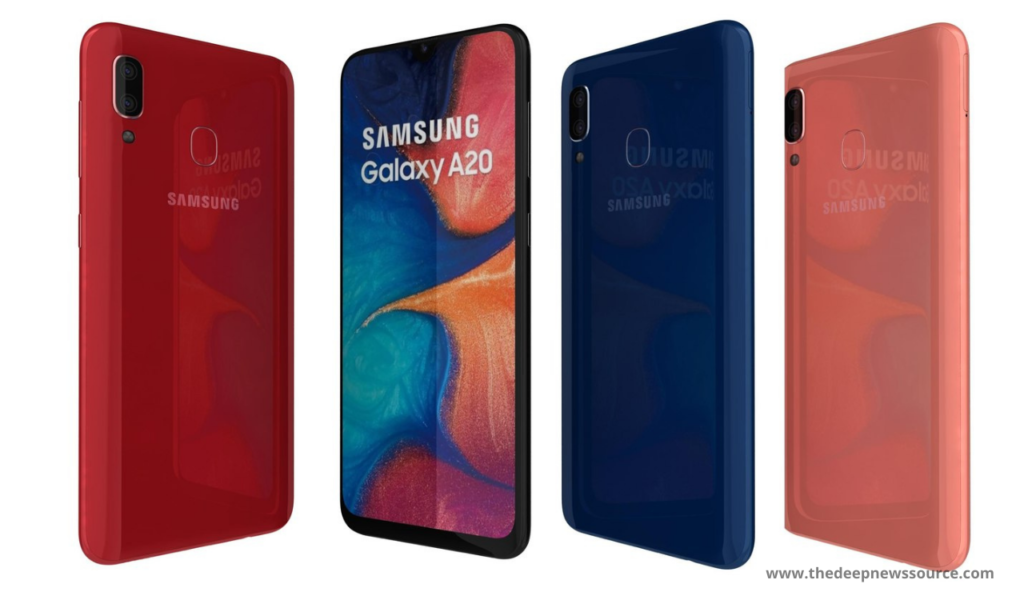 On the other side, the Samsung Galaxy A30s smartphone users also receiving the same major update with the build number A307FNXXU2CUF2 and it is available in Russia just like the Galaxy A20 smartphone. Additionally, this update brings the older month May 2021 security patch.

Both major updates which are mention above should be available in other regions in the coming days. In the end, the most important notification for both smartphones, the Android 11 is the last major update for the users. Although, both smartphones will continue to receive the monthly patch update until 2023.