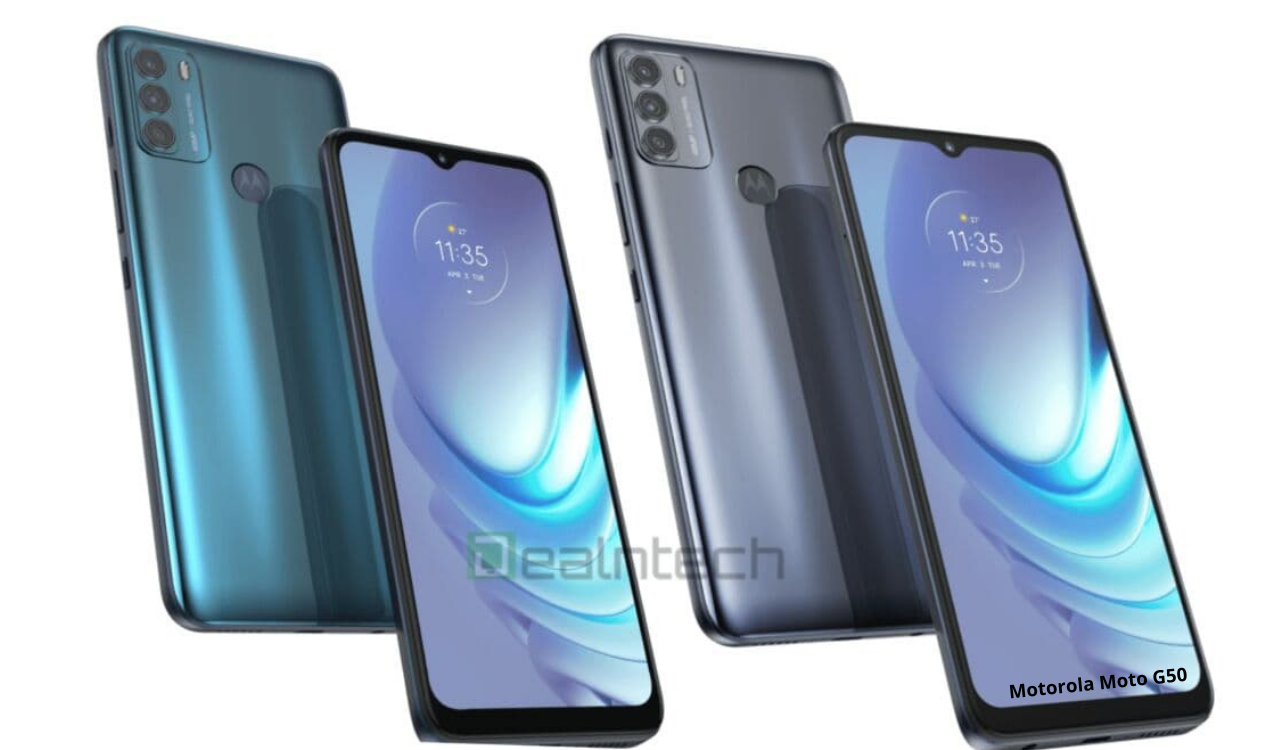 Motorola has preparing to launch its new smartphone with the name of the Moto G50 on the European market. As per the rumored report, the smartphone will be powered by the Snapdragon 480 and supports the 5G network as well. Motorola Moto G50 is spotted on the Geekbench and recently the smartphone has also ented the Ministry of Industry and Information Technology.

Apart from the Snapdragon 480 processor, the smartphone will be offering a 90 Hz IPS LCD screen with a screen resolution of 720 pixels. The Moto G50 is backed by a 4850mAh battery that supports 20W charging. The smartphone comes with a waterdrop notch and it has a three rear camera setup on the backside 48-megapixel main camera, a 5-megapixel (suspected ultra-wide-angle) and a 2-megapixel macro. On the front side, the smartphone carries a 13-megapixel sensor. 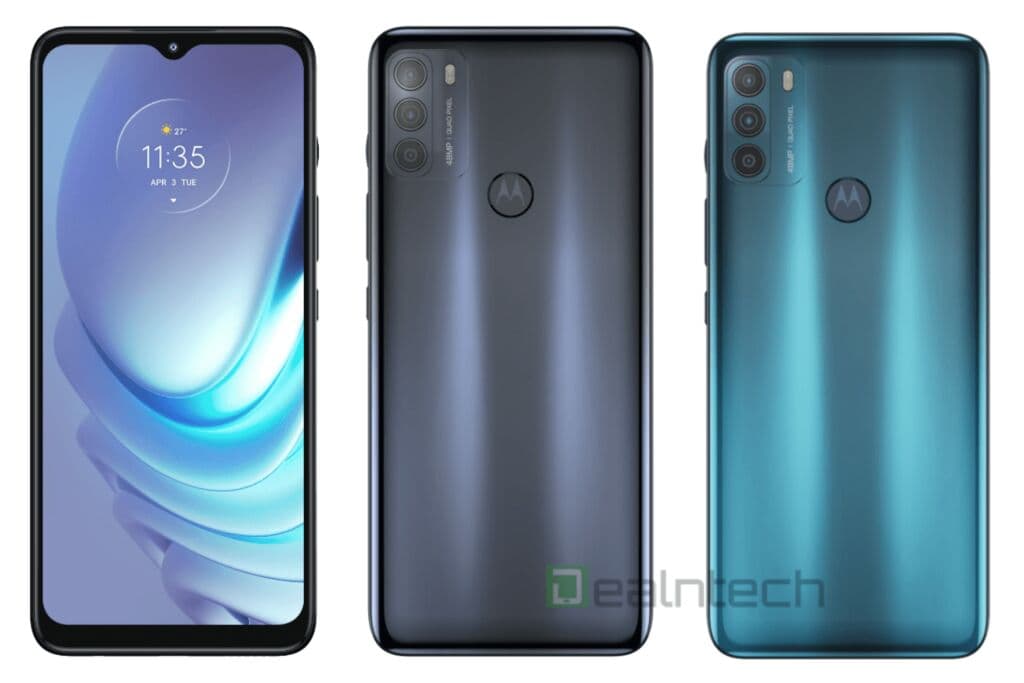 According to the image, the smartphone will become with two color options namely Grey and light blue. In terms of the price, the Moto G50 will be launch with 4GB and 6GB RAM and 128GB expandable storage through the Micro-SD card while the cost of the smartphone is € 29.17 (roughly INR 19,750) in Europe. 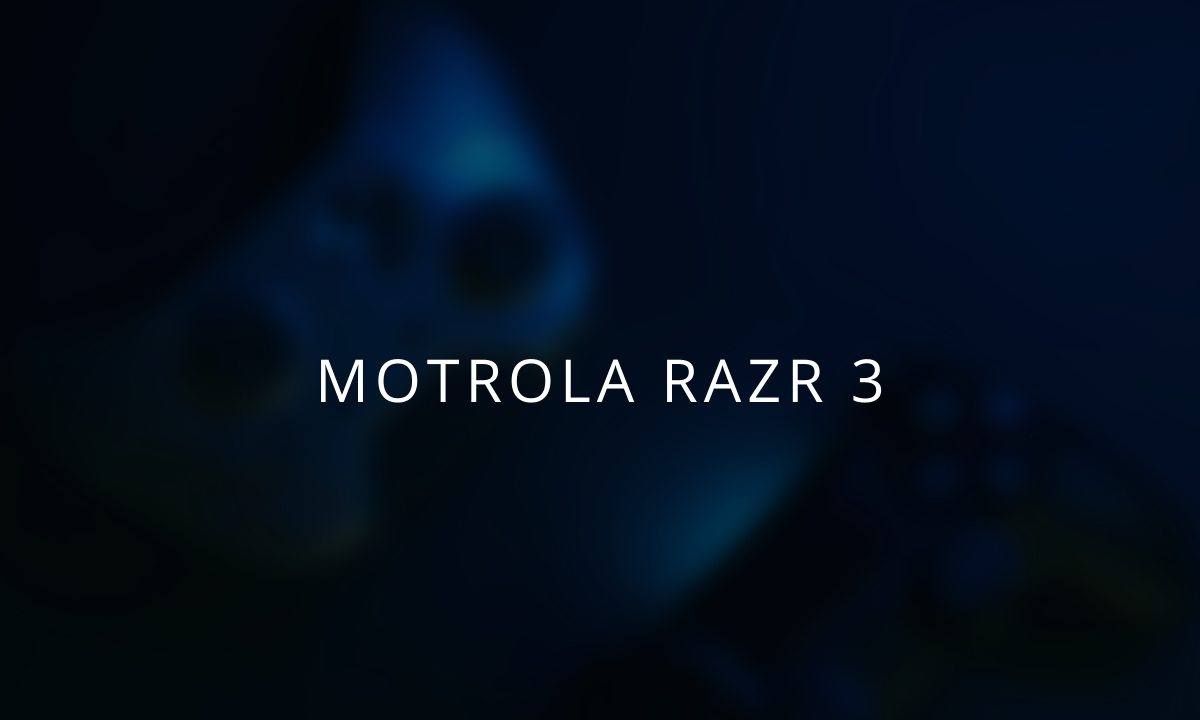 Motorola is expected to release the Razr 3 this year after releasing the original Razr in 2019 and the Razr 5G in 2020. Today, Chen Jin, general manager of Lenovo China’s mobile phone business department, posted a clock wallpaper of the Razer exterior screen. 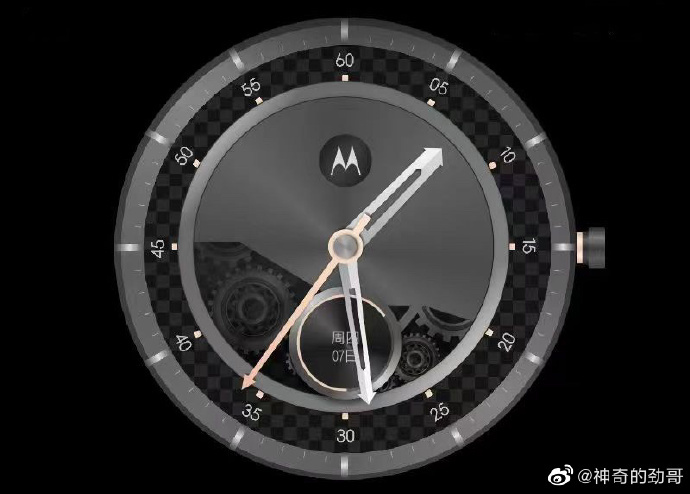 Chen Jin said he couldn’t put it down for the thought of Razer watch wallpaper. The razor in Chen Jin’s mouth should be the upcoming Razer 3. At the same time, some netizens asked about the timing of the release of the plane in the comment area, but Chen Jin did not respond.

It is worth mentioning that Chen Jin also hinted on Weibo the day before that the Razr 3 will be equipped with an X-axis linear motor and stereo dual speakers.

From the Razer 3 animation released by @evleaks, the machine adopts a top-down folding design, which is close to that of the Samsung Galaxy Z Flip3, but the outer screen area is much larger. With the clock wallpaper of the outer screen exposed by Chen Jin today, the Razer 3 can best be described as a second turn from a mobile phone to a clock.

As for the detailed specifications of the machine, Weibo blogger @Digital chat station broke the news on June 18 that the Motorola Razr 3 will feature a 6.7-inch FHD+ 120 Hz OLED flexible punch-hole display, a 32-megapixel selfie camera, and a front-facing camera. will be used. A rear-mounted selfie camera. 50-megapixel primary camera with 1/1.5-inch sensor size, followed by a secondary (probably ultra-wide-angle) 13-megapixel camera. In terms of performance, the Razr 3 is equipped with Qualcomm Snapdragon 8+ Gen 1 chip, as well as 12GB of memory. However, the blogger broke the news that the machine is equipped with a 2800 mAh battery. Chen Jin responded by calling it specifications of the previous generation Razr, suggesting that the battery capacity of the Razr will be improved. 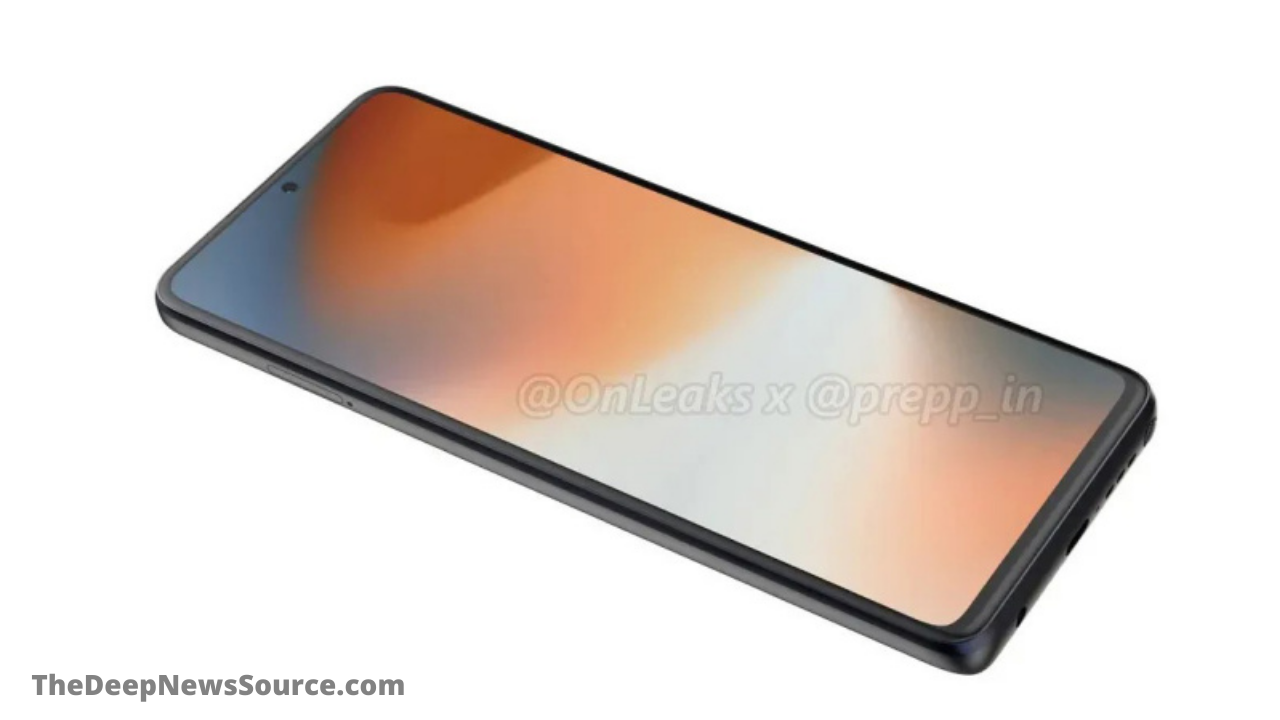 According to a foreign media notebook check, Motorola is about to launch the 2022 Moto G Stylus model. At present, some parameters and renderings of the mobile phone have been exposed by the well-known whistleblower OnLeaks.

The phone is expected to be equipped with an IPS LCD straight screen, 6.8 inches, and support a 90Hz refresh rate. There is a 3.5mm headphone jack at the bottom of the phone, and a SIM card slot on the left border.

The whistleblower said that the phone will be equipped with the MediaTek Helio G85 SoC chip and only support 4G networks, but the specific processor model has not yet been determined. The product will have a built-in 5000mAh large battery, no NFC function, and a pre-installed Android 11 system.

The DNS has learned that the 2021 Moto G Stylus is equipped with a Snapdragon 665 processor and is also equipped with an IPS LCD screen, but only supports 10W charging. The 2022 model will be equipped with three rear cameras. The main camera is expected to use a 50MP Samsung JN1 sensor, as well as a 16MP front camera. 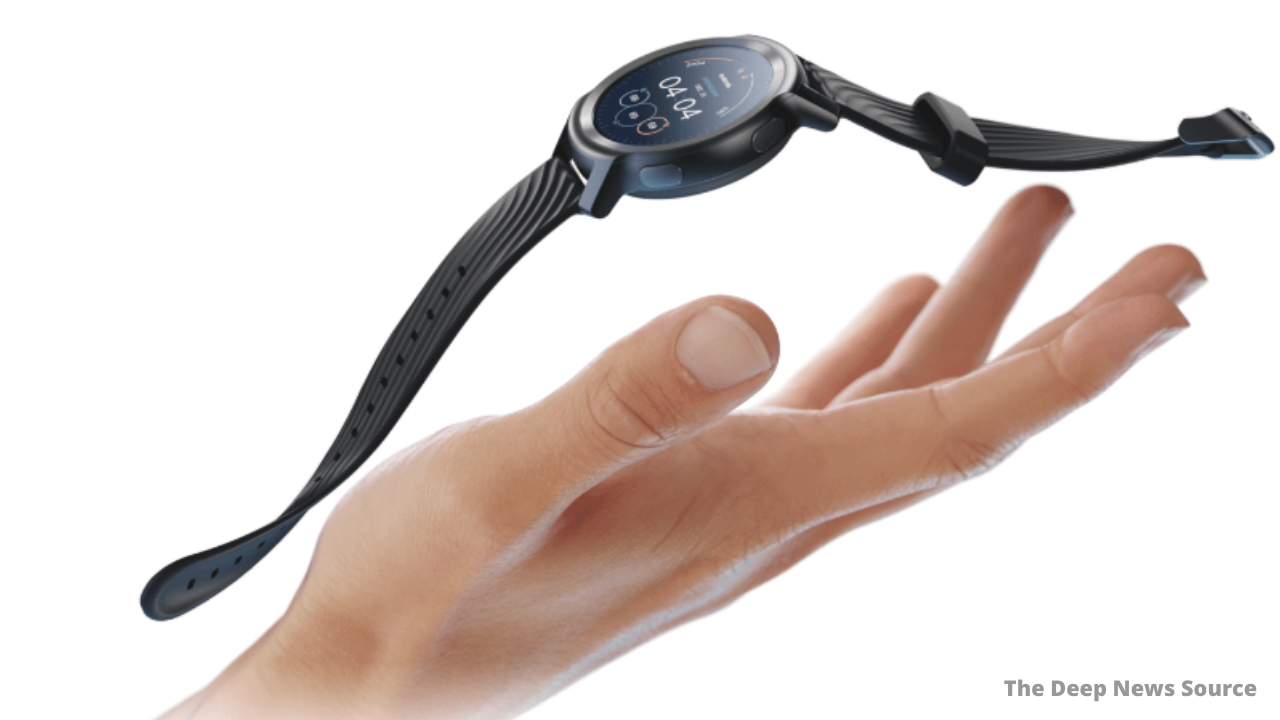 Motorola today released its new smartwatch, the Moto Watch 100, which uses a round dial design and is priced at US$99.99 (about RMB 639). 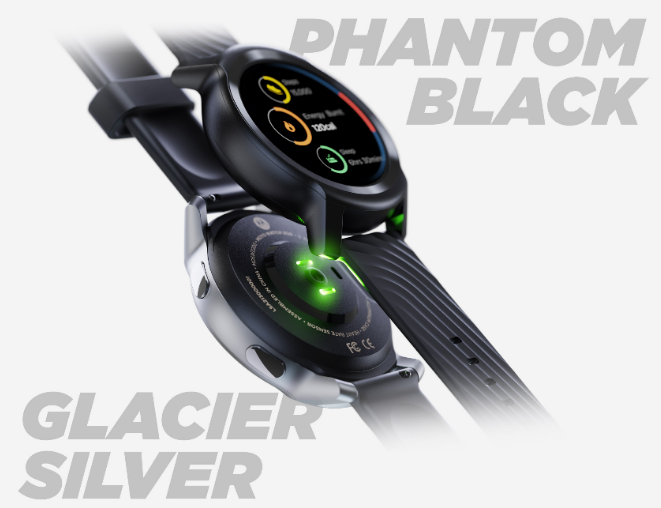 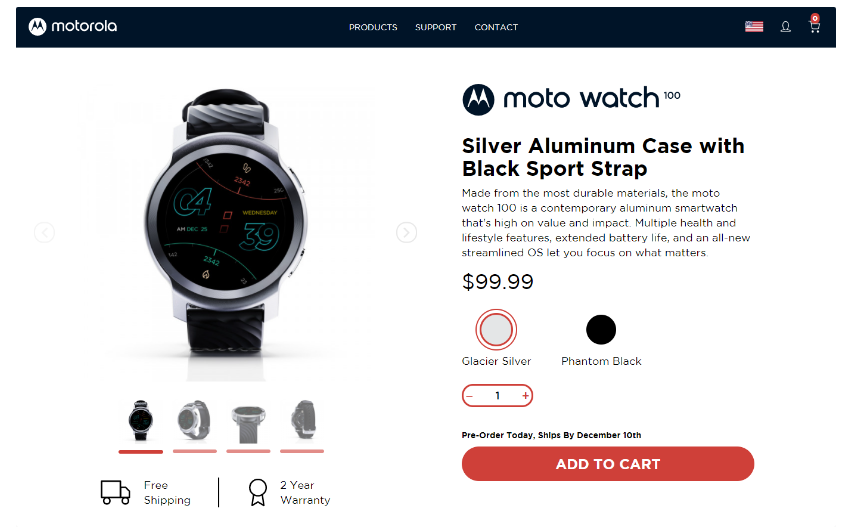 The US official website of Motorola says that the dial of the Moto Watch 100 is available in Glacier Silver and Phantom Black. Size is 42mm x 46mm x 11.9mm, weight is 45.8g, and strap width is 20mm. The dial adopts a circular design, the case is made of aluminum, and the size is 42mm.

The front of the watch sports a 1.3-inch LCD screen that supports Always-on mode. There’s an HRM heart rate detection sensor and a magnetic charging interface on the back of the watch, and it supports 50 meters of swimming water resistance (5 atm). 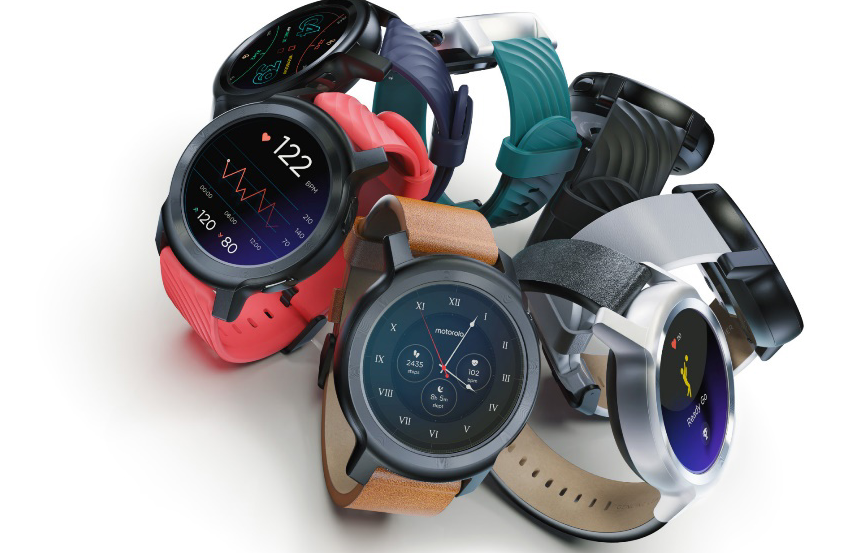 The battery capacity of Moto Watch 100 is 355mAh and it supports magnetic fast charging. Motorola claims that the watch can be charged from 0 to 100% in 60 minutes, battery life is 2 weeks, and the watch supports Bluetooth 5.0 and Beidou/GPS/GLONASS positioning functions. 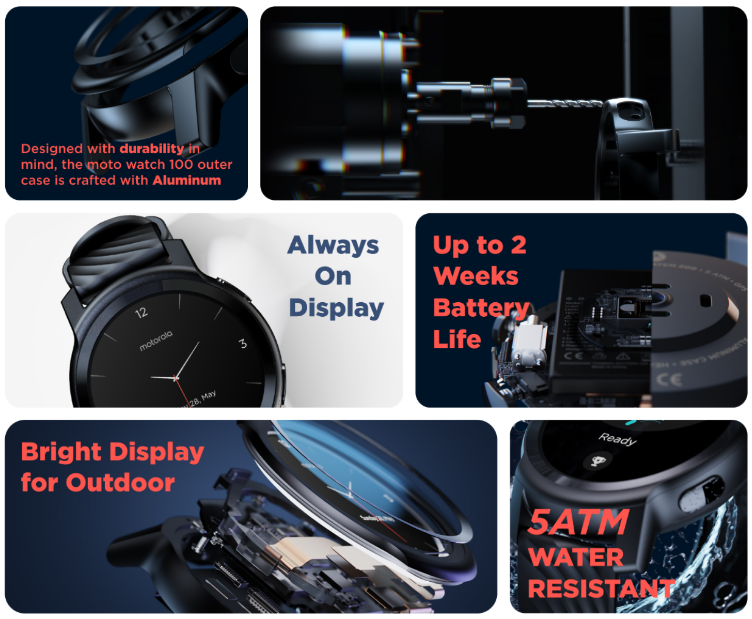 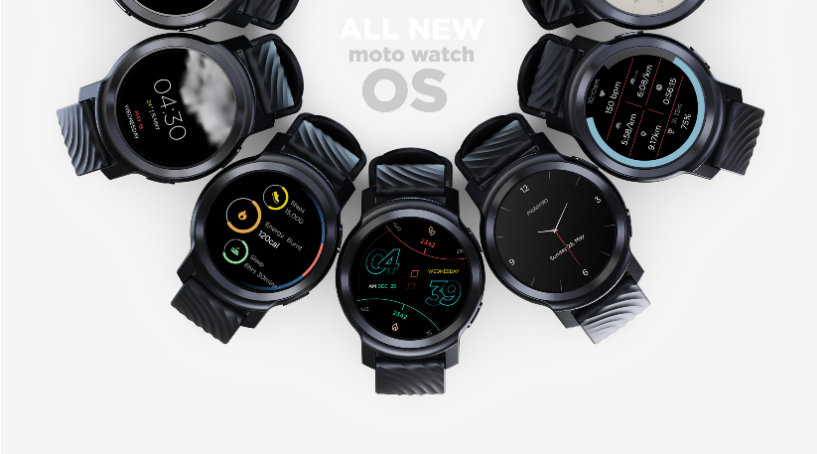 The Moto Watch 100 is now officially listed and can be ordered in the United States on the official website of Motorola. It will be shipped before 10th December. It should be noted that this product is not strictly speaking from Motorola, but from a company called eBay now, the company has obtained the brand authorization of Motorola, and the 2019 Moto 360 is also manufactured by the same company.